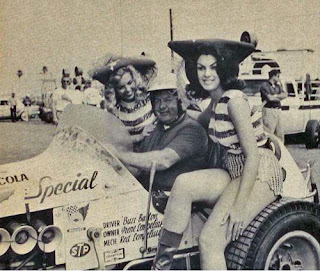 It was an endurance run for the 48-year-old Barton and his face was almost as red as his flaming shirt as he crawled out of the Thomas Offy after completing the 30 laps.

“Man, I’m all done,” was his comment, although he managed a smile to collect the Pepsi Cola Trophy and a kiss from lovely Cookie Benken, the Golden Girl Speed Queen.

Gordon Woolley of Waco, Tex., driving the Honore Bardahl Chevy in which he won the opener last Wednesday, rode a comfortable second. Jim Moughan, Springfield, Mo., was third in the Lancaster Chevy.

Barton took the lead early in the race on sheer grit and energy, wrestling through the soft dirt thrown to the top of the track. After that he came down in the comfortable middle groove on the turns and gunned it just hard enough to build a big lead and keep it.

Heat winners were Russ Laursen of Cumberland, Wis., in a Chevy; Ralph Quarterson of Greenville, Pa., in a Chevy; and Carl Williams, Kansas City, Mo., in the Wilson Chevy. Williams broke his own track record on the eighth lap, with a time of 3:45.29. Saturday he set a record of 3:46.39.

A heavy rain early Sunday morning made the track tacky and heavy at the start of the afternoon of action, but it smoothed out to a slick center groove by the end of the heats.