1972 - Andy Hampton Proves He Still Has What It Takes 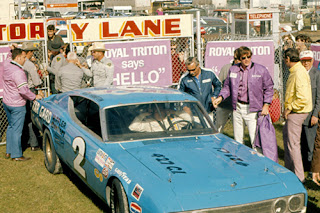 
Daytona Beach, Fla. (February 13, 1972) - For Andy Hampton, who admits he’s in the twilight of his career, winning a race at famed Daytona International Speedway “is something your grandchildren can remember after you’re gone.”

“It really doesn’t mean that much to me, other than showing the younger drivers that you still have what it takes to win. But it means a lot to my seven children back home,” the pudgy, graying, 43-year-old campaigner from Louisville, Ky., said Sunday.

Hampton, who with his four sons operates a “soft sell” used car business when he isn’t racing, had just won the ninth annual Royal Triton 300 stock car race at Daytona - a race he dominated like no other driver in recent years.

He broke away from the other 39 starters with the dropping of the green flag and, except for brief pit stops, was never out of the lead. He paced the field for 104 of the 120 laps. Hampton, frequently turning the awesome 2.5 mile tri-oval at speeds above 178 miles per hour, averaged. 199.175 miles per hour for his 300 mile trip - an outing he said was made “just a little bit tough by high winds.”

Iggy Katona, a 56-year-old veteran from Willis, Mich., finished second, while Red Farmer of Hueytown, Ala., a comparative youngster at 37, was third. Both trailed Hampton by more than five miles. Dave Sisco of Nashville, Tenn., and Charles McWilliams of Walton, Ky., were fourth and fifth, respectively, far off the pace. 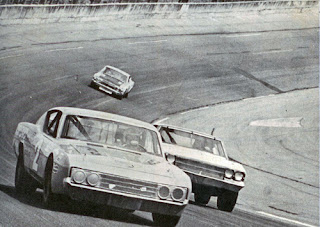 Andy Hampton #2 on his way to winning the ARCA-sanction Royal Triton 300  - FloridaStockcars.com photo


Hampton was paid $4,300, a small sum as auto racing purses go these days, but still the biggest on the ARCA circuit each year. The money, however, wasn’t the big thing for the winner.

“I have a lot of trophies scattered around the house in Louisville,” he said, “but the one I took for winning at Daytona back in 1968 has a special place all by itself. This one will go in beside it, something for my children and grandchildren to scrap over when I'm gone.”

The race, favored by mild, clear weather, drew 23,500 spectators and most of them were still around when Hampton completed his 2 hour, 9 minute and 20 second chore, though it was obvious from the halfway point who the winner should be.

Asked how much longer he expects to race, Hampton smiled and said, “Well, all you need is a pair of strong arms, 20-20 vision and enough sense to stay out of trouble.”