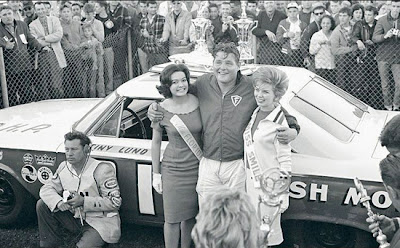 Drafting is following in the leader’s wake at high speed and being towed along in his vacuum. Lund, a comparative rookie among the racing veterans who blasted off in the field of 50 which started the "500", proved himself an expert and it netted him a 24-second victory over Fred Lorenzen of Charlotte, N.C., Sunday with 30-year-old Newton, N.C., grain broker Ned Jarrett a disappointing third.

They were running bumper to bumper, Lorenzen, Lund and Jarrett in that order, with only 15 miles to go when the pace-setting Lorenzen had to hit the pits for gasoline. Lund immediately let Jarrett take over and set the pace. And with only three laps remaining, Jarrett, too, had to halt for fuel.

That’s when the towering Lund, a 6 foot, 4 inch 270-pounder born in Harlan, Iowa, took over and drove it home through those last 10 miles for his triumph, his own gas just barely lasting.

Marvin Panch, the 1961 winner of the Daytona 500, had been scheduled to pilot the car, which Lund drove. But two weeks ago in practice for a sports car race, Panch crashed and Lund risked his life to pull Panch from the car.

The race was delayed an hour and 46 minutes by midday showers and the first 10 laps were run under the yellow caution flag while the track dried. Then, in the middle stages, there was another eight-lap caution drive while the car of Dick Good of Mishawaka, Ind., was removed from the backstretch racing strip.

Thus Lund didn't have a shot at the average speed record of 152.529 miles per hour establishes last year by Fireball Roberts on Daytona Beach. But his winning average of 151.966 was indicative despite the delays, of the lap speeds of 162 to 164 miles per hour with which the pack was touring the two and one-half mile asphalt oval.