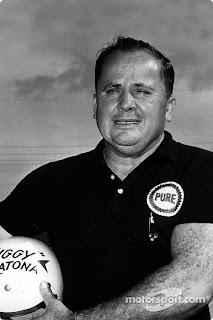 
He survived spins, smashes and penalties, which weeded out six others who led at various stages, and finished two car lengths in front of Andy Hampton of Louisville, Ky. Benny Parsons of Detroit finished in the bunch with Katona and Hampton but was one lap behind and placed third. All three drove 1964 Fords.

Six caution flags flew a total of 29 of the 100 laps around the 2.5-mile Daytona International Speedway. This slowed the pace to 132.684 miles per hour compared to the ARCA record of 154.103 miles per hour set by Nelson Stacy of Daytona Beach last year.

The ARCA drivers, more accustomed to shorter Midwest tracks where they race in the summer, nevertheless put caution aside and thrilled the crowd of about 10,000 by running full tilt when turned loose.

Four sensational crashes sent one driver to the field hospital. He was Rich Clement of Chicago, who was treated for bruises and released. Clement crashed into the outside concrete wall coming off the west turn.

Jack Bowsher of Springfield, Ohio, who started in the pole in a 1965 Ford, led for several laps but was penalized for passing the pace car on a regrouping of the field during a caution flag. He would finish fifth.

Harry Pick of Cicero, Ill., took a similar penalty of several seconds holdup in the pits and was fourth in a 1964 Mercury.