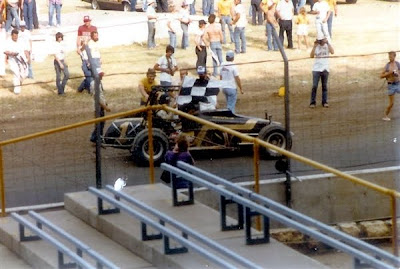 
Larry Phillips of Springfield, Mo., never dreamed he would even compete in the prestigious NCRA (National Championship Racing Association) event.

But those two race drivers walked off with the super modified and late model stock titles Sunday before an estimated 9,000 fans. It was the Silver Anniversary for the NCRA's oldest competition.

Peters, 30, has been either attending or competing in the Grand Nationals since he was a youth. He out dueled pole-sitter Herb Copeland, also of Wichita, during the final 26 laps after a 30-minute rain delay. Peters overtook Copeland coming out of the fourth turn on the 48th lap of the 50-lap event.

“This is just something that I've always come to but I had no idea I'd ever win it,” Peters said. “I think Herb running into lap traffic was the key for me. I think he hesitated which way to go and I was able to get past him. When I got through, there wasn't any lap traffic in front of me.”

Copeland, who had qualified for the pole by moving up six places in winning his heat earlier, said a blistered right rear tire had led to his car's inability to handle the turns.

“The left one then just wore out and it kept me from getting the throttle going coming out of the turns,” Copeland said. “If we'd been working good like we were earlier (in the race), there'd been no problems. We floundered. I'm not surprised (at losing). Not the way we were working.”

For Peters, the victory Sunday was his first NCRA title since 1979 when he won at Oklahoma City.

“No doubt, this is the biggest thrill of my life,” he said. “The car was well prepared when I got here and the guys (pit crew) and the owners did a fantastic job. It was a team effort.”

Early-race casualties were defending champion Harold Leep and Dale Reed, a two-time past champion, both of Wichita. Both cars lasted just through the second lap before exiting.

Woodside overtook Copeland coming out of turn one on the 16th lap and held the lead until the rain delay hit as the cars started the 24th lap. After the delay, Copeland and Peters moved past Woodside on the backstretch of the 36th lap.

It was the two cars that battled the remaining 14 laps, with Peters taking the lead for good on the 48th lap. He maintained a two car-length lead through to the checkered flag. Woodside was third and Walt McWhorter, also of Wichita, was fourth.

While Peters has been around the Grand National event for several years, Phillips' appearance was his first. The fact the race is run during the day, and in hot July, is more reason than any for Phillips, 38, staying away in the past.

“I had a friend who has been trying to get me out here for a while but he's always telling me how hot it is,” Phillips said. “Now I believe him. I'd like to come back but I'd like for it to be about 10 degrees cooler next time.”

Phillips, too, had nabbed the pole position for the feature race by winning his heat during Saturday's qualifying. Phillips reveled in his victory.

“Yes sir, I'm thrilled to death,” Phillips said. "I'm fortunate enough to be lucky out there on the track.”

Phillips rarely makes an appearance in NCRA events, running where the money is best. But when he does compete, he usually performs well. He was two of two a year ago in NCRA events.

“How much did I win today?” he asked. “I hope it's a good purse. I'd like to come back and defend next year. This track is good one when you get the lead.”

Phillips had lost his lead at the outset of the race, with Terry Deatherage moving past him on the first lap.

“That really made me mad and I just kept close until it was the right time to make the move,” Phillips said. “It was a tough race. Terry's a good driver. He got up beside me (on the 41st lap) but I held him off and then was able to pull away.”

Phillips credited his car's new Dick Sweat motor for Sunday's victory. “The new motor is working just great,” he said. “I think that showed here today. This was a good one (victory). The best I ever had.”

For Deatherage, the runner-up finish provided only another frustrating performance for him at the Grand Nationals. It was the third straight year he has finished in that position.

“I got boxed in (on lap 23) and he just happened to find the hole to go by me,” said Deatherage. “It's nobody's fault but my own. I thought I could get him back but I started losing fuel pressure with about 25 laps to go. Larry's one of the best short trackers in racing and he just beat me around.”