1995 - History made as Wapello Speedway closes 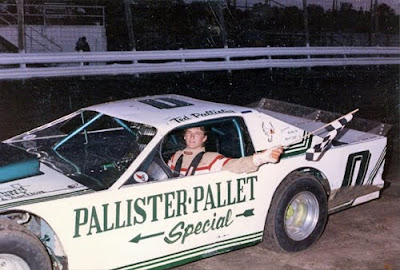 And then Wapello Speedway became history, closing its doors for the final time after the final feature.

Pallister entered the night with a 13- point lead over Steve Sutliff with Rob Toland, LeRoy Brenner and Gary Russell, also within reach of the title. Pallister started on the pole and led Sutliff off the start. Toland quickly moved to the low side with Pallister to grab second place by the end of the first lap. Pallister held on through three cautions, and then fought off Toland by staying in the low groove. Toland tried high and low, but Pallister held his line and beat Toland to the finish line by a car length.

"I'd like to dedicate this one to my mom (Susan)," Pallister said. "We needed this one. (Toland's) pretty tough. It's hard when you're leading because you don't know if your line is working or not. I heard him back there. I figured he would be coming pretty hard - he normally does."

Thye also won the first and last pro stock races at the track. Thye entered the night with a 27-point lead over Dave Goble in the point’s standings.

Thye, starting from the pole, grabbed the quick lead on the high side. Thye began pulling away midway through the feature and easily beat Goble to the checkered flag to win the points championship.

"I won the first race here and the last," Thye said. "I tried to stay on the high side. I knew nobody would get around me there. Dave (Goble) and I usually have some good races."

Willert entered the modified feature with a 51-point lead over Bill Roberts. Willert clinched the point’s title before the first lap was completed. Roberts spun out in turns three and four of lap one, causing major damage to his car. With Roberts out of the race, the point’s title was Willert's.

Willert, who had cylinder problems with his car in the feature, went on to finish fourth behind winner Randy Wages.

"I'd like to thank the Pallisters for bringing modified racing here," Willert said. "It's sad to see it ending. But this was probably one of my greatest feats. I've been racing for 14 years and this is my first point’s championship."

Raymond ended the T.Q. midget sprint season the same way he started it - with a win. Raymond, who lost only one race at the track, overtook Jay Anderson with one lap remaining to win the feature and points title.

"I wanted to win it," Raymond said of the point’s title. "I wanted to make a race out of it and make it exciting for the fans. But that's hard to do with just three cars in the field."

Richardson clinched the hobby stock point’s title while winning his 16th feature of the season. But he paid a high price for the win. Richardson held a 56-point lead over John Schulz entering the feature. Richardson and Schulz, just as they have all season, dueled for the lead throughout the early portions of the race. After six yellow flags, Richardson finally pulled away to beat Rodney Bliesener for the win.

But Richardson's car broke an axle as he went into turn one after taking the checkered flag. A tire flew off the car, sending the car rolling over the turn.

An ambulance and several drivers rushed to the scene. Richardson was not injured, but was upset about the damage to his car.

"It doesn't mean anything," Richardson said of the point’s title. "There's no track anymore."

Kinsley held an eight-point lead in the Friday Night Cruisers class over Rodney Bliesener with Bryan McCleary and Marlin O'Donnell also within reach. But Kinsley took the lead on the start, and then held off a late charge from Bliesener and Tim Wagner to win the feature and the point’s title.

Lisa Hinds will go down in the history books as the last driver to win a feature at Wapello Speedway. Hinds got past Carla Timmerman in lapped traffic with two laps remaining in the I Lady Cruisers feature to win the final race at the track. Despite finishing second in the feature, Timmerman claimed the point’s title.