1994 - Paul Proksch and Mike Belling topped the NASCAR late model twin 25-lap features at La Crosse Fairgrounds Speedway on Saturday, July 23. In the first feature, Proksch came from his seventh starting position, worked his way through traffic and passed Shawn Pfaff on lap 19 for the lead and the checkers. Pfaff settled for second, holding off a hard-charging Kevin Nuttleman, who finished third. In the second main event, Belling had a relatively easy time, taking the lead from John Christenson on lap 3 and lengthening his lead from there. Tim Nelson, Rick Wateski, Proksch and Jeff Krueger followed. 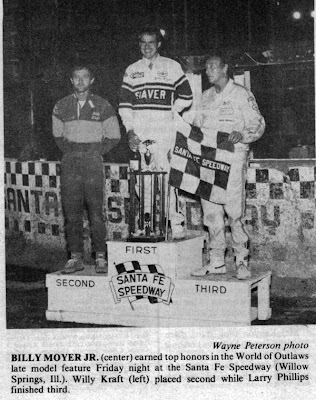 1988 - Billy Moyer Jr. grabbed the lead on the 48th circuit and went on to win the World of Outlaws late model feature at Santa Fe Speedway in Hinsdale, Ill., on Friday night, July 22. Dick Potts paced the first 14 laps of the event before Willy Kraft powered in front. Kraft dominated for the next 34 laps before lapped traffic slowed up the leader. Moyer took advantage of the traffic to weave past Kraft and gain the lead on lap 48. Moyer led the remainder of the race to take home the $4,000 first place money. Kraft, Larry Phillips, Potts and Johnny Stokes rounded out the top five. 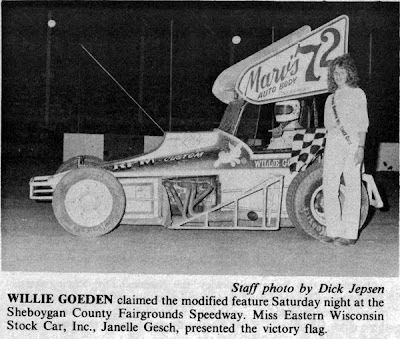 1983 - Willie Goeden notched his second victory of the summer as he topped the 30-lap super modified feature on Saturday, July 22, at the Sheboygan County Fairgrounds in Plymouth, Wis. Goeden grabbed the lead on the second lap and maintained a slight edge over Frankie Heimerl throughout the event. Dick Berth placed third while Greg Hartlaub nosed out Ron Luedtke for fourth. 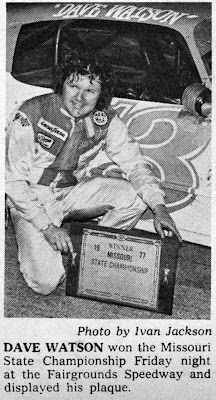 1977 - For the second year in a row, Dave Watson of Milton, Wis., showed a star-studded field of late models the route to victory in the 100-lap Missouri State Asphalt Championships at Fairgrounds Speedway in Springfield, Mo., on July 22. Watson grabbed the opening lead and was trailed by Joe Shear of South Beloit, Ill., Mark Martin of Batesville, Ark., and David Goldsberry of Bolivar, Mo. Shear rode Watson's bumper at the beginning of the race until dropping off the pace on lap 54. Martin would apply pressure and on lap 58, take the lead. As Martin slowly pulled away from Watson and the rest of the field, a caution on lap 83 bunched everyone up. On the restart, ignition trouble brought Martin's car to a halt, giving the lead back to Watson. Watson then held off a fast finishing Goldsberry to ice the triumph. Rusty Wallace of St. Louis, Mo., would finish third after running with the leaders early in the contest.