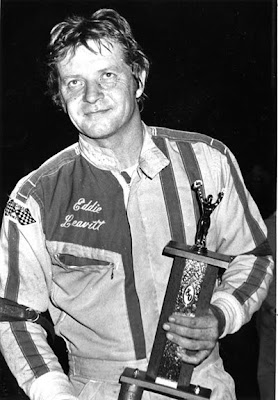 Des Moines, Iowa (July 28, 1976) - Eddie Leavitt of Kearney, Mo., capitalized on good track conditions Wednesday night and led all the way as he captured the “A” feature on the Elder-Forester Invitational sprint car program at the State Fairgrounds.

Leavitt, who just started driving the car owned by Fred Atin of Tucson, Ariz., two weeks ago, felt the condition of the track was a factor in his one-half straightaway victory over Marshall.

“The track was in good shape for a fairgrounds track,” said Leavitt, who also won the six-lap trophy dash. “It's the best condition I've ever seen this track in.”

Marshall slid past Saldana on the twenty-fourth lap to take second-place money of $750. But his total for the night reached $870 after setting a one-lap record in qualifying and finishing fourth in the trophy dash.

The native Texan powered his sprinter around the half-mile oval in 23.036 seconds to wipe out a 20-year-old record set by the late Jud Larson of Kansas City, Mo.

“I'm really pleased, especially to get the track record,” Marshall said. “I'm originally from Austin, Tex., and my father grew up with Jud Larson. He was one of my first idols," continued Marshall. "I never got to see him race but I watched a lot of films of his races.”

Marshall was one of five drivers to go under Larson's record. The others were Roger Rager of Mound, Minn., Saldana, Larson, and Doug Wolfgang of Des Moines, who was sixth in the feature.
The “B” feature was won by Lenard McCarl of Des Moines, with Dave Ellis of Pacheco, Calif., second and Gary Johnson of Colfax third.

McCarl passed Johnson for the lead on the sixth lap of the 15-lap race and was never threatened. McCarl's biggest problem, however, was his own car, which threw oil onto him all during the race and lost its power steering midway through the event.

Mark David of Ankeny was the “C” feature winner over Roy Petz of Gilmore City.