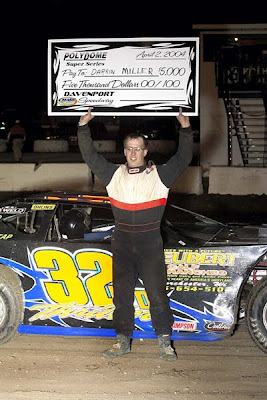 Darren Miller hoists his $5,000 check high after winning the WDRL season opener in Davenport, Iowa on April 2, 2004. - Enhance Racing Images
2004 - Darren Miller of Chadwick, Ill., picked up the top prize Friday evening, April 2, at the World Dirt Racing League's season opener at Davenport Speedway. Brian Birkhofer of Muscatine, Iowa, was a contender throughout the race, leading much of the early going, but he was passed by Miller on the 32nd circuit of the 40-lap event. Birkhofer, Mark Teske, Jim Sandusky and Denny Eckrich would round out the top five. Seventy-one late models signed in for the race.

1999 - Tom Gille took the win in the Budweiser Ice Breaker 40-lap main event for the NASCAR late models at Rockford Speedway on Saturday, April 3. Gille led all 40 laps and withheld pressure from both Bobby Hacker and Bobby Wilberg to take the season-opening victory. In other action, Tom Atchinson grabbed top honors in the American Short Tracker feature and Bobby Frisch won the Roadrunner feature on the final lap.

1993 - Danny "The Dude" Lasoski became the fifth different driver in six events to win a World of Outlaws Sprint Car Series "A" feature this year at Memphis Motorsports Park on April 3, leading the final three laps to claim the $5,200 prize. Kenny Jacobs, who earned the right to start the 30-lap main on the pole by winning the fast dash, raced ahead of the 24-car field and led the first 27 laps before Lasoski grabbed the lead and won going away by 10 car lengths. Jacobs would finish second followed by Dave Blaney, Mark Kinser and Danny Smith.

1988 - Rick Standridge and Eddie Shickle won UMP late model features at the 42nd season opener at Macon (Ill.) Speedway on Sunday, April 3. Standridge held off Roger Long by mere inches to win the first feature while Shickle, from Bloomington, Ill., led all the way in winning the second 25-lap main event. Due to heavy rain on Friday, the track had to push the season opener from it's regular Saturday night date to a Sunday afternoon matinee.