1994 - Bitterly cold temperatures chilled race fans to the bone, but it didn't keep them from turning out in masses for the season opener at Greenbelt Speedway in Eldora, Iowa, on Sunday, April 30th. Promoter Al Urhammer and his staff ran a quick, smooth program that saw the final checkered fly at 8:50 pm as John Logue of Boone (IMCA Modified), Al Johnson of Jewell (IMCA Stock Car) and Al Dixon of Webster City (IMCA Hobby Stock) capture season opening victories. 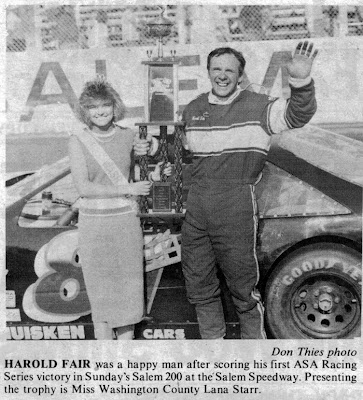 1988 - Veteran Harold Fair survived a last lap challenge and went on to capture the $54,438 ASA Racing 200-lapper and notch his first career ASA Racing victory of his career on Sunday afternoon, May 1 at Salem (Ind.) Speedway before 9,481 spectators. Fair, making his 109th career start, grabbed the lead on lap 83 when pole winner and race leader Butch Miller spun trying to avoid lap traffic. Fair retained the lead after the midway break, held off Dick Trickle and then Miller on the last lap to earn $7,425 of the massive purse. Miller, Bob Senneker, Kent Stauffer and Mike Eddy rounded out the top five. 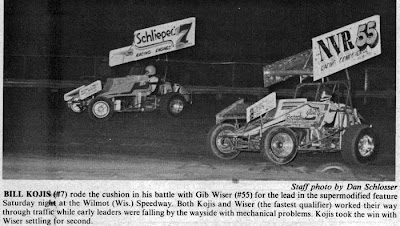 1983 - Bill Kojis opened Wilmot (Wis.) Speedway's season with an impressive victory in the 25-lap super modified feature on Saturday, April 30. Carmen Manzardo took the lead on the event's sixth lap and appeared headed for victory until the halfway point when a broken axle sent him to the sidelines. Kojis took over from there, and despite a late challenge from Gib Wiser, maintained the top spot to the checkers. Wiser, Bob Robel, Gene Erdmann and Ron Luedtke were the top five. 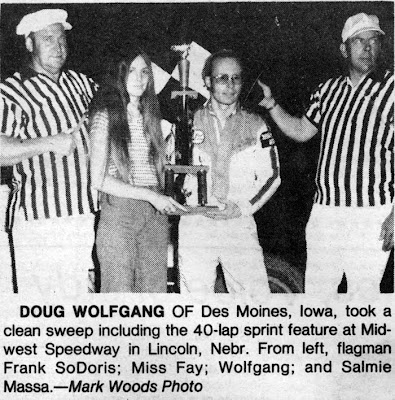 1977 - Doug Wolfgang of Des Moines, Iowa scored the 40-lap sprint car feature victory on Sunday night, May 1st at Midwest Speedway in Lincoln, Neb., before a crowd of 4,000. Wolfgang made it look relatively easy as he grabbed the lead on the fourth lap and never faced a serious challenge throughout the contest despite numerous restarts. "This is the first time this car has been raced, but it worked like a veteran tonight," Wolfgang stated in victory lane afterwards. Lonnie Jensen and Roger Larson put on a show in the battle for runner-up honors with Jensen eventually getting the edge. Jim Riggins and Butch Bahr rounded out the top five.