Remembering the hectic schedule of the IMCA Big Cars 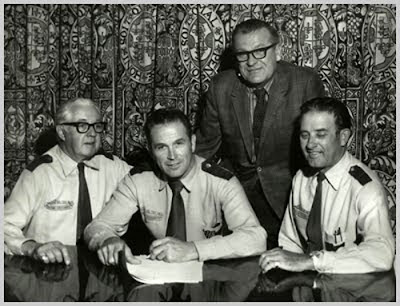 by Lee Ackerman
Omaha, Neb. - After World War II, America was ready for entertainment and the International Motor Contest Association did their best to fill that need. The automobile would come into its own after the war as more and more families could afford one or more vehicles. Horses were replaced by cars, trucks and tractors.

The country was still a largely agricultural based society (especially in the nation’s breadbasket). Every year families from the farms and small communities looked forward to going to their county and state fairs and displaying their products. While they were there they got a chance to attend whatever was playing in the grandstand, and it was there that the IMCA provided them with plenty of racing action.

The IMCA was founded in 1915 and one of its most enterprising founders was J. Alex Sloan who became known as “The Maker of Champions.” At the time of his death in 1937 Sloan was promoting more races than all other promoters combined. After his death his son John took over as President of the American Booking Agency and continued to promote races until racing was effectively banned at the start of World War II.

During the pre World War II era, a number of drivers who would go on to become racing legends would dominate the IMCA Big Car racing scene. The first official champion of the IMCA was St. Paul, Minnesota Fred Horey, who took the championship in 1925 and 1926. From 1927 through 1932 the championship belonged to Sig Haugdahl, who hailed appropriately from Daytona Beach, Florida.

From 1932 through 1936 Gus Schrader won the championship. To this point, all champions had been driving a car called a Miller. In 1937 Schrader repeated but this time in the Schrader Offenhauser. Offenhauser had arrived and would be around for a long time. Le Mars, Iowa’s Emory Collins won in his own Offy in 1938, with Schrader returning to the throne for the next three years until the ban of auto racing for the war.

With the resumption of auto racing in 1946 three names would come to the top in the IMCA, Emory Collins, Tampa, Florida’s Frank Luptow and Kent, Ohio’s Deb Snyder. All three of course, were driving Offenhauser's.

In 1946 IMCA would hold 82 Big Car races, starting as they would for many years in February in Tampa, Florida. Before the season would end they would race from Tampa to Pueblo, Colorado and from the northern states of North Dakota, Minnesota and Wisconsin to Louisiana and about every place in between. At the end of the season, Collins in his famed #7 Offy would regain the IMCA Championship.

In 1947 the Big Car Series upped its event total to 103 getting as far west as Salt Lake City, Utah and as far south as Houston, Texas, on several occasions, sanctioning at least 3 different races on the same day. Collins would retain his championship with Jimmy Wilburn of Indianapolis and Deb Snyder in hot pursuit.

If 1947 seemed like a busy year for the association, 1948 and 1949 would take busy to a whole new level. In both years IMCA would complete at least 138 races and this does not count some that were not held for weather or other reasons. On May 30, 1948 they would sanction 4 races on the same day in 3 different states. When the dirt settled at the end of 1948 it was Emory Collins, once again on top but with pressure from Snyder and Luptow.

In 1949 IMCA crossed the border and held several races in Canada as well as competing in Alabama and Georgia in addition to their normal territory. They also started running more afternoon-evening doubleheaders at certain tracks. The season ran from February 1 through December 18. (And fans today think the season is getting longer). This time it was Frank Luptow, behind the wheel of his Lazy 9 that would claim the crown. He was followed by Collins, Wilburn and Snyder.

In 1950 the pace dropped considerably and IMCA held 95 races with Collins driving for Winkley and Luptow for Sweeney. Canada, Alabama and Louisiana were still on the schedule and Luptow once again claimed the championship followed by Collins and Snyder.

Frank Luptow would win his last IMCA championship in 1951 beating out Deb Snyder for the honor as Emory Collins faded from the scene. Deb Snyder would get his turn on the throne in 1952 and 1953. While the series might run 65 or 70 races gone were the days of over 100 races a year.

In 1954 Bob Slater of Des Moines, Iowa would defeat Bobby Grim for the championship.

In June of 1955 Slater would be fatally injured while leading the race at of all places, Des Moines. Bobby Grim would end years of frustration and drive the Hector Honore Offenhauser to the championship, the first of four straight, before he decided to go Indy Car Racing. Pete Folse would then assume the throng in the cockpit of Honore’s Black Deuce and add three more championships to Honore’s trophy case.

Over the years society would become less and less agricultural, the interstate highway system would be built and people became more and more mobile. Attendance and state and county fairs diminished and the number of races contested each year by IMCA continued to drop. But for many years, the place to be was at State and County Fairs and the highlight of the trip was watching the Big Car races.