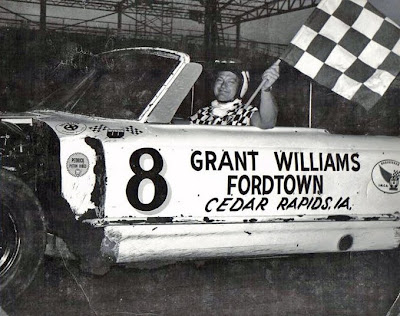 Cedar Rapids, Iowa (April 24, 1966) - The first regional division in the history of the International Motor Contest Association (IMCA) will open the season next weekend with Davenport’s Mississippi Valley fairgrounds the scene of the action Friday night, April 29, and Hawkeye Downs in Cedar Rapids, Saturday night, April 30.

Most drivers will probably be happy to know defending champion Darrell Dake of Cedar Rapids will not be ready for either opening night. “I just don't see how I can make it,” Dake said. “I've been really busy building cars for other drivers all winter, and right now, I'm about two weeks from finishing my own.”

IMCA race promoter Homer Melton stated that he's had nearly 60 IMCA late model modified license applications, which would certainly indicate that there will be a larger field of cars than ever before. All of the top contenders plus many new faces will be in the lineup next weekend.

“I tried it out a couple of weeks ago in Oklahoma City,” Droste said, “and I was very satisfied with the performance.”

Jerry Mabie of Cedar Rapids, now in his sophomore season, will be driving a 1965 Chevrolet powered by a 427 cubic inch engine. Bill Zwanziger of Waterloo will return in a 1964 Ford convertible; Mert Williams of Rochester, Minn., in the same 1956 Pontiac; Charlie Moffit of Stanwood in the same 1957 Plymouth; Jerry Reinhart in a 1964 Ford, a car driven on the USAC late model circuit last season by Bay Darnell; and Roy Pearson of Cedar Rapids is in the 1959 Plymouth that John Connolly drove last season. Connolly earlier announced he’d be driving the 1961 G & H Racing Ford.

A partial entry list for Cedar Rapids and Davenport;