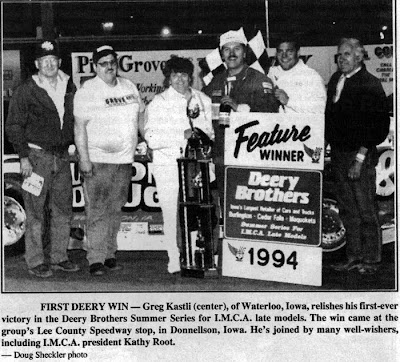 1994 - A packed house at Lee County Speedway in Donnellson, Iowa, watched Waterloo, Iowa's Greg Kastli score his first career Deery Brothers Summer Series victory on April 23. The race started with Jeff French of Adel, Iowa and Greg Hunter of Independence, Iowa on the front row. Hunter would lead the first lap but that would be it, as Kastli would pass Hunter for the top spot on lap two and lead the rest of the way from there. Kevin Cale would thrill his hometown fans with a strong second place finish while Bryan Wanner of nearby Winfield, Iowa would take third, Davenport, Iowa's Rollie Frink earned fourth and Curt Martin of Independence, Iowa grabbed fifth. 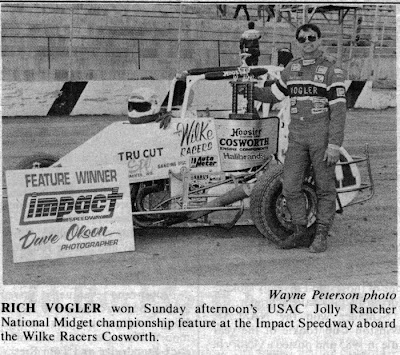 1988 - Rich Vogler outdistanced Stan Fox to win the USAC Jolly Rancher's Candies National Midget Series 30-lap feature on Sunday afternoon, April 24 at Impact Speedway near Oregon, Wis. Mel Kenyon charged out to the early lead but Vogler took command on the fifth round. A red flag accident on lap 27 would bunch up the field, but Vogler held off a late charge from Fox to grab the checkers. Kevin Doty, Kenyon and Johnny Parsons rounded out the top five. 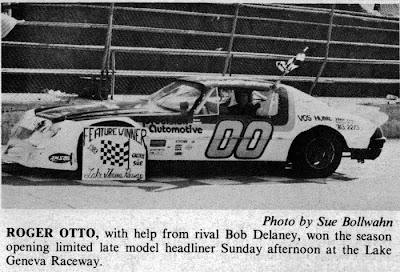 1983 - Roger Otto of Burlington, Wis., with the help of a fellow competitor, won the 30-lap limited late model feature at the Lake Geneva Raceway season opener on Sunday afternoon, April 23. Otto was having motor issues before qualifying, so Bob Delany of Lake Geneva ran home to his garage and retrieved some spare parts to get Otto up and running. In the feature, Otto raced past early race leader Eddie May of Crystal Lake, Ill., on lap 13 and then held off Delany at the checkers. May, Bob Rossa of Burlington and Bob Dauterman of Spring Prairie, Wis., followed Otto and Delany across the finish line. 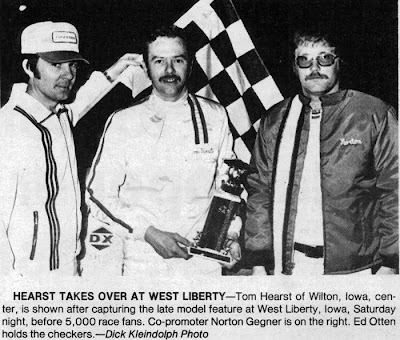 1977 - Tom Hearst of Wilton, Iowa and Kenny Fenn of Washington, Iowa each scored a clean sweep before a crowd of 5,000 race fans during the season opener at West Liberty Raceway on Saturday, April 23rd. On hand for the evening were 38 late models and 25 sportsman, trying for a share of the $4,000 purse offered by Super Stocks, Inc. Hearst would display extreme driving proficiency in his 1977 Camaro, leading from start to finish in the 25-lap feature. Mike Niffenegger of Kalona, Red Dralle of Evansdale, Duane Steffe of East Moline, Ill., and Ron Weedon of Pleasant Valley would follow. In sportsman action, the veteran Fenn would battle rookie Darrell Walker of Wapello for all 15 laps of their feature before finally prevailing in the closing laps to seal the deal. Walker, Ron Pallister of Wapello, Ron Boyse of Wellman and Johnny Johnson of Morning Sun rounded out the top five.