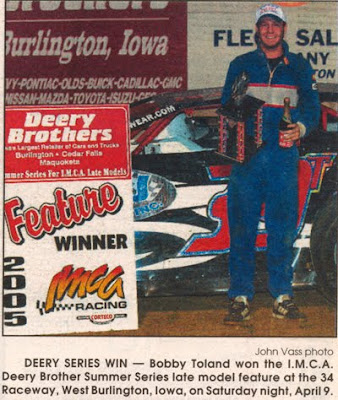 2005 -Bobby Toland, the son of defending Deery Brothers Summer Series champion Rob Toland, scored his first career series victory at 34 Raceway on Saturday, April 9. Toland, of Hillsdale, Ill., ran second most of the 40-lap race before passing Waterloo, Iowa's Dean Wagner II with five laps to go and collecting $2,000. Wagner, Kevin Blum of Colona, Ill., Rob Toland and Darren Ackerman of Readlyn, Iowa were the top five finishers. The race was 34th in series history at the West Burlington, Iowa oval, which had hosted more Deery events than any other track. The field of 57 late models was loaded with talent, with everyone looking to win "The 34th at 34".

2000 - Scott Hatton took advantage of lapped traffic to score a thrilling victory in the 47th annual Hut Hundred midget feature race at the Terre Haute Action Track on Sunday afternoon, April 9. Hatton moved around race leader Kevin Doty on lap 94 of the 100-lap race and then held off his opponent by .95 seconds at the finish. Hatton's $5,000 victory came in his first race driving for Dwight Huston's Budweiser-sponsored race team. Doty, Aaron Fiscus, Dean Franklin and J.D. Turner would follow Hatton across the finish line.

1989 - Doug Wolfgang, the third winningest driver in World of Outlaws history, recorded his second "A" main win in as many weekends, edging WoO point's leader Jac Haudenschild by one car length at Bloomington (Ind.) Speedway on Friday, April 7. Wolfgang started on the pole and led the first 38 laps before Haudenschild made the pass for the lead just as the white flag waved. Wolfgang would return the favor by passing the "Wild Child" on the backstretch and win by just a few feet at the wire. Wolfgang earned $5,000 for the victory, while Haudenschild would settle for runner-up honors. Bobby Davis Jr., Kevin Huntley and Steve Siegel would round out the top five. 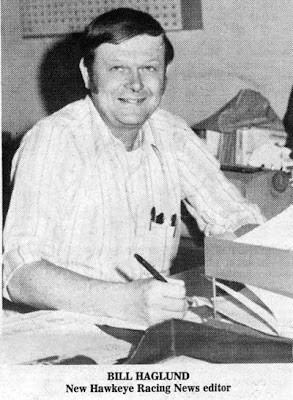 1979 - Publisher Keith Knaack announced the appointment of Bill Haglund as editor of Hawkeye Racing News on April 9. A native of Alleman, Iowa, Haglund joined the staff at HRN with more than 14 years experience in daily newspapers in both sports and news department. Haglund's background in racing went back more than 20 years when he began attending races at Fort Dodge, Iowa and the now-defunct tracks in Dayton, Iowa and Pioneer Raceway in Des Moines.