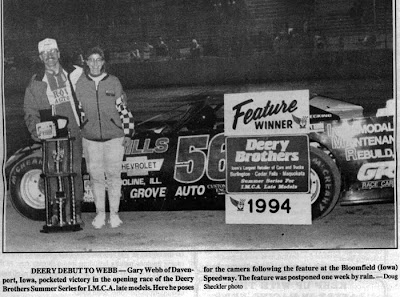 1994 - After having to wait a week because of rain on opening night, the Deery Brothers Summer Series season opener took place at Bloomfield (Iowa) Speedway on April 16th. Davenport's Gary Webb and Marshalltown's Darrel DeFrance traded the lead several times in a real "nail biter" before Webb was able to secure the top spot for good on lap 33 and led the remaining seven laps to take the $1,500 top prize. Greg Kastli of Waterloo made a late move on DeFrance to take the second spot while DeFrance, Kevin Cale of Donnellson and Craig Jacobs of Des Moines rounded out the top five. 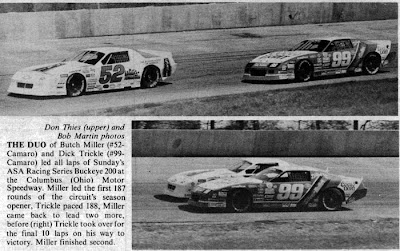 1982 - A standing room only crowd at Sunset Speedway watched as Doug Wolfgang of Sioux Falls, S.D. threaded his way through traffic from his 13th starting position to post what most believed to be his third feature victory in two days in the World of Outlaws event on Sunday, April 18th. However, WoO officials disqualified Wolfgang for changing a tire on the track under the yellow and he was placed in 18th position, giving the win to Steve Kinser of Bloomington, Ind. Wolfgang had posted a pair of wins on Saturday at the Iowa State Fairgrounds (USAC Midgets) and at Knoxville Raceway (World of Outlaws). 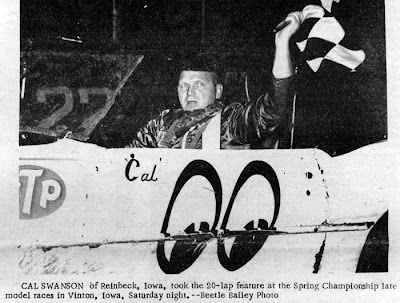 1971 - Cal Swanson of Reinbeck, Iowa took on some of the Midwest's best late model drivers on Saturday night, April 17, to capture the Spring Championship at the Benton County Fairgrounds in Vinton, Iowa. Swanson banked $250 for his feature victory, his first and only checkered flag of the evening as more than 2,100 race fans watched the thrilling action on the renovated 1/4-mile. Arlo Becker of Atkins churned around the oval to finish second followed by Ed Sanger of Waterloo, Curt Hansen of Dike and Bill Zwanziger of Waterloo. Many fans were turned away on a perfect night for racing as the Cedar Valley Racing Association, sponsors of the race program, had to put up "standing room only" signs at the ticket window a full hour before the racing commenced.