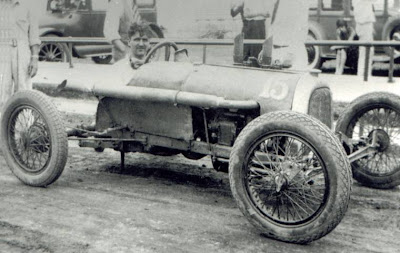 Marion, Iowa (April 4, 2011) - For the younger people involved in the sport of grass-roots racing, the name Johnny Gerber doesn’t mean a lot. But for race car drivers and fans from more than a few decades, it was 32 years ago today that Iowa lost a former big car champion and later manager of the very popular Midwest Midget Auto Racing Association and it left a very deep void.

Born in Kansas but raised in the Cedar County town of Stanwood, Iowa, the farmer-race car enthusiast would spend much of his life in Davenport. Many considered Gerber the greatest name ever in Iowa racing circles.

From 1921 through 1942, John built and raced his own sprint cars with amazing success. He was a popular figure in the early days at old Frontier Park in Cedar Rapids, which is now Hawkeye Downs. At one time, his homemade cars held track records in four states at the same time.

“The old Whippet didn't look like much,” John was quoted as saying. “But it could run with the best of them.” Back in the early days of “open racing”, Gerber's homemade machines were once the toast of the nation in dirt track circles. In his prime, he usually finished in front of another pair of Iowa racing greats, the late Gus Schrader of Newhall and Emory Collins of LeMars.

Gerber was on top of the racing heap for around 20 years before temporarily retiring back to the farm. One of his greatest personal achievements came back in 1933 when Gerber and Maynard “Hungry” Clark of Milan, Ill., teamed up to challenge the East Coast racing competition. The two took the Gerber car to the Woodbridge, N.J., Speedway, considered the heart of big-time, dirt track competition.

When the dust had cleared, Johnny had the feature trophy and all the east coast stars were nursing red faces. He and Clark became the best source of copy for eastern newspaper writers, including many New York columnists. The two were billed as the “farmers from I-0-way” and the columns all told of the “Iowa farmers who stunned the East Coast racing fraternity.”

Jack Curley, the top racing promoter of the era, went clear to south New Jersey to find a pig that suited John well enough to have Gerber pose with the pig in his cockpit for publicity purposes. “I wouldn't accept just any of those scrawny eastern pigs,” Gerber was quoted as saying.

On an occasion during Gerber's hey-day as a race driver, rumors that he had been killed in a crash in Milwaukee spread like wildfire around the Cedar Rapids area.

Old-timers said those few rumors resulted in a flood of calls to the old Cedar Rapids Gazette-Republican newsroom. “They finally tracked me down," John once recalled. "I told them if I was dead it was all news to me.”

After World War II, a group of drivers, mostly from Eastern Iowa, and many from the Cedar Rapids area, tried to start a midget racing program. It did very poorly until the drivers got together and talked John out of retirement.

Under his direction, the MMARA became one of the most popular racing circuits in Iowa history. At the height of its glory, midgets were racing weekly before 5,000 or more fans at the former CeMar Speedbowl on First Avenue East in Cedar Rapids and even more in Davenport. One championship race at Davenport drew 12,000 fans and several thousand more were turned away.

Johnny Gerber’s impact on racing in the state of Iowa will probably never be surpassed.