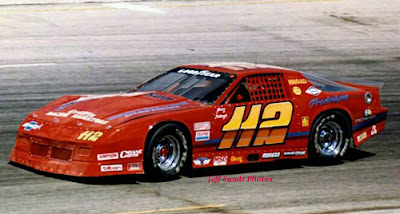 Gary Balough
Nashville, Tenn. (November 9, 1986) - After being rained out for the third time last Saturday night, the All Pro/ASA Miller All American 400 was finally run on Sunday afternoon at the Nashville (Tenn.) Motor Speedway.

Before a surprisingly large crowd, Gary Balough of Fort Lauderdale, Fla., became the first two-time winner in the six-year history of the event. Balough had previously won in 1984.

Balough took the early lead from his outside front-row starting spot and held on until being passed on lap 48 by pole-sitter Mike Alexander.

The order was then shuffled several times during yellow flag pit stops until Balough once again took command under yellow on lap 140.

He would hold the top spot until being passed by rising ASA star Bobby Dotter on lap 223. Balough and Dotter held sway until near disaster struck on lap 303. Alexander, while leading after a restart, made contact with the lapped car of Darrell Brown in turn two with both cars spinning.

Brown vaulted the inside guardrail and Alexander suffered extensive front end damage. Balough spun to avoid the others and backed into the stopped Alexander machine.

Both leaders were able to continue and Balough actually took the lead at that point. Alexander, minus some body work, fell in at the tail of the lead lap, but was slowed by the damage and unable to maintain the pace.

The final restart came with 32 laps remaining. Balough, Dotter, Mark Martin and Butch Miller were the only ones left on the lead lap at that time. Balough left the others behind on the restart, but Dotter wasn’t out of it yet. He made up a nearly 4 second deficit in less than 10 laps, tried desperately to make a pass for the win, but fell short at the finish by less than a car length.

Martin, who had driven a flawless race, was slowed over the last 20 laps by a fading battery. He was credited with ninth place, and that was enough to gain him his fourth ASA points championship.

His closest rival for the title, Dick Trickle, finished the race in fifth, but it wasn’t enough to make up the points he needed to overtake Martin.