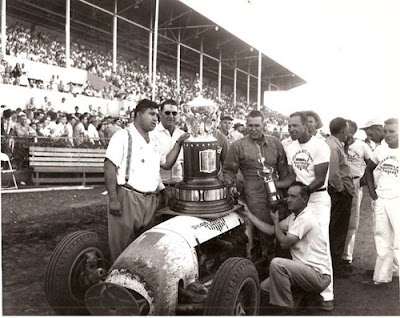 Jimmy Bryan accepts his trophy after winning the Bobby Ball Memorial at Phoenix.

The victory earned Bryan $3,183 and undisputed possession of the United States Auto Club national championship for the third straight year.

His official time on the 100-lap dirt track at the State Fairground was 1 hour, 9 minutes and 46 seconds. Johnny Boyd of Fresno, Calif., who led on the first 34 laps, finished third, followed by Art Bisch of Phoenix.

Next in order were Johnny Tolan of Norwalk, Calif.;. Jim Rathmann of Miami, Fla.; A. J. Foyt of Houston, Tex.; Bud Randall of New Orleans; Earl Motter of Oakland, Calif., and Bob Veith, also of Oakland.

Bryan took the lead on the 70th lap to break a deadlock between himself, O'Connor and defending champion George Amick of Venice, Calif.

O'Connor overtook him when Bryan went wide on the 98th turn. The two drivers dueled all the way to the finish line, Bryan finishing about a car length ahead.

No one was hurt in the race, although only 10 of 18 starters finished.