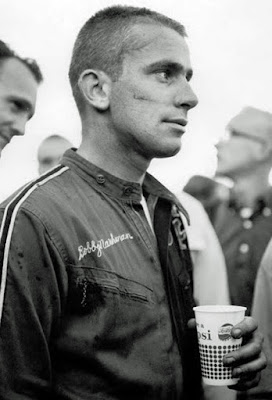 A somber Bobby Marshman after being declared the winner of the Bobby Ball Memorial.
Phoenix, Ariz. (November 18, 1962) – Elmer George lost control of his speeding racer coming out of a rough north turn, flipped over the guardrail and into an overflow crowd of spectators, bringing an abrupt termination to the scheduled 100-mile Bobby Ball Memorial at the Arizona State Fairgrounds on Sunday afternoon.

George, of Speedway, Ind., was severely cut around the head and shoulders. Twenty-two spectators were treated for injuries at several area hospitals.

But no one was killed in a mishap that had all the ingredients to be one of racing’s greatest tragedies.

The accident occurred while the race was in the 49th lap. The flagman waved the field around for two more laps under the yellow caution flag to make the race official, then stopped the cars.

After George was dragged from his capsized racer and the injured removed, officials of the United States Auto Club and local promoter Mel Martin announced the race could not be continued in safety since the guardrail in front of the grandstand could not be repaired.

There were a few grumblings from the capacity crowd, but most fans agreed they’d watched a good race and accepted the short show as just part of racing luck.

Bobby Marshman of Pottstown, Penn., was declared the winner and collected the $4,800 first prize. Marshman, driving the Lindsey Hopkins Special, hustled his car into the forefront on lap 30 after a tight duel with Parnelli Jones of Torrance, Calif., and A.J. Foyt of Houston, Tex.

The trio made a runaway of the early minutes of the race and had lapped most of the field by the 21st circuit around the one-mile dirt oval.

Foyt was running hot on Marshman’s tailpipe when the accident occurred. He took home approximately $3,000 for his runner-up effort.

Jones, last year’s Bobby Ball winner, turned in a 35.94 second qualifying time to win the pole position. He would get bogged down in traffic chasing Marshman and was some five seconds in back of Foyt – with three lapped cars in his way – when the race concluded.

Spectators had jammed the forebay in front of the grandstand in order to get a closer look at the action but USAC officials wouldn’t start the race until they stepped back from the flimsy fence that separated the track from the crowd area. They did – but moved back in after the race had started.

The safety rail circling the track was the same type used on highways. Where George’s car made impact, it was anchored in with 6x6 wood posts. But a few paces further in front of the grandstand area posts were only 2x4’s holding the guardrail level.

George’s car barely lost speed as it ripped through this area, flipped and landed upside down amid spectators standing in front of wood bleachers set against concrete grandstand front wall.

The abbreviated win was the first of the season for Marshman who noted in accepting the trophy, “I’m glad it was stopped. My car is worn, and it was a question of going all the way. I think the same applies to Foyt.” 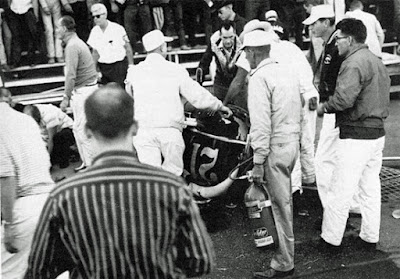 Rescue workers surround Elmer George's HOW Special and attend to injured spectators at the 1962 Bobby Ball Memorial. George crashed into the stands, on the 47th lap, injuring 23 race fans. The race was called after 51 circuits, and Bobby Marshman was declared the winner.