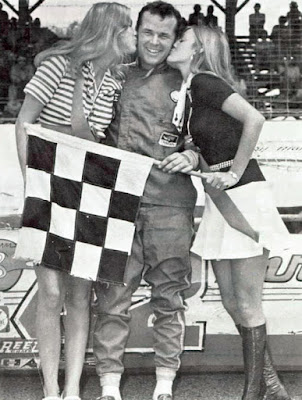 Jerry Makara reaps the benefits of winning the Midwest 300 at Salem.
Salem, Ind. (November 7, 1976) – For the first 25 laps of the 100-lap championship segment at Salem Speedway, Jerry Makara found himself racing his Camaro door-to-door with a Camaro driven by Randy Sweet as the pair battled for the lead.

Then a flat tire forced Sweet to the sidelines on lap 26. He would have to stop twice more for the same problem because, as the Portage, Mich., ace later found out, he had a bent wheel rim.

“When I saw Randy go into the pits with the first flat tire, I felt really confident,” Makara said.

He had good reason to…his car was performing flawlessly.

The Westland, Mich. Star never was seriously challenged as he stayed in front the rest of the way to pick up the $2,150 first prize money from a $11,750 purse.

Second place and $1,050 went to Rodney Combs of Mason, Ohio, who had to drop out of the first qualifying 100 when he had problems with his Camaro. He started 25th in the final 100-lapper.

Makara won the first heat easily after fast qualifier Mike Eddy of Kawkawlin, Mich., had tire problems. Dennis Caves of Salem escaped injury when his car flipped over the third turn guardrail during the second heat, which was won by Sweet.