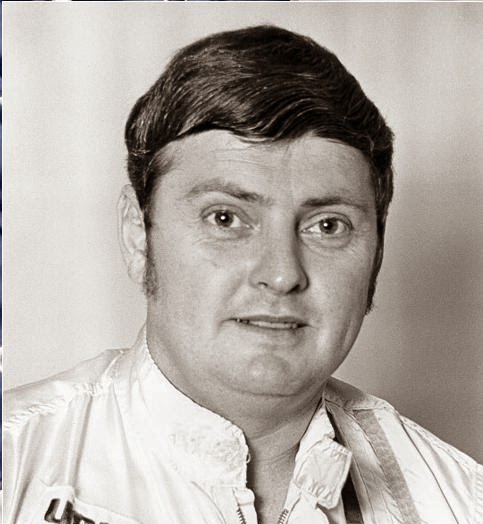 Butch Hartman
(May 1, 1971) - Butch Hartman of Zanesville, Ohio, drove his 1969 Dodge Charger to victory in the United States Auto Club late model stock car 100-lap feature at Marion County Fairgrounds on Saturday night.
Hartman took the lead on the 67th lap from Verlin Eaker of , who was driving a 1970 Plymouth Roadrunner owned by Fred Horn of .
Eaker, USAC’s rookie-of-the-year in 1969, had led the race from the sixth lap, but was forced to slow down because of mud on his windshield. By the 74th lap he had slowed considerably, and nearly hit the wall. Eaker’s troubles didn’t cease. On the 83rd tour, going into turn one, the flywheel went and wiped out everything, engine and all.
Second place went to Ernie Derr of Keokuk, the 11-time International Motor Contest Association champion. However, the anticipated battle between Derr and Roger McCluskey, the USAC champion, failed to materialize.
McCluskey finished seventh, also a victim of the muddy track. Roger pitted his ‘70 Roadrunner four times because of a malfunctioning windshield wiper.
Don White of Keokuk, who is Derr’s brother-in-law, set fast time in qualifying with a 24.80 second clocking for one lap. But White had his share of problems, too, and bowed out after 19 laps because of clutch failure. There were three lead changes.
Wally Christensen of charged early and led through three laps. Then Dave Wall of took over for two laps before he collided with Lem Blankenship of Keokuk. Eaker roared into the lead at that point and maintained that spot until the 67th lap.
The crowd was estimated at 6,000 for the 1971 USAC opener.
Results -