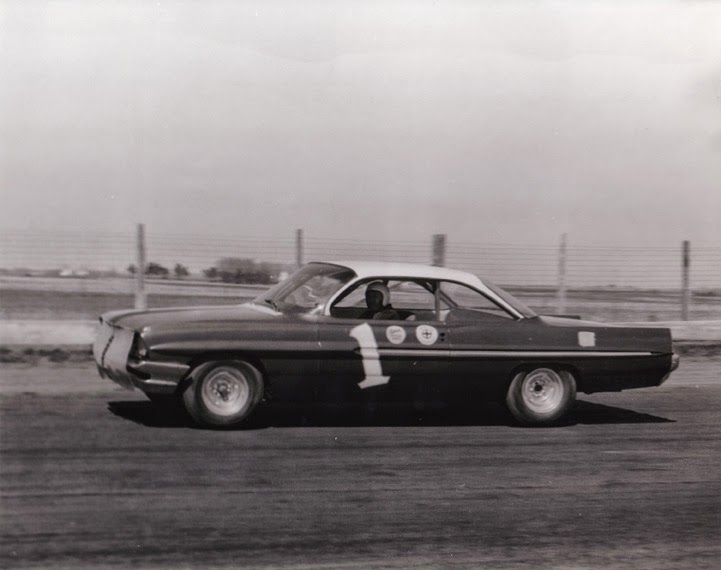 Ernie Derr
Topeka, Kan. (May 27, 1963) – Lady Luck deserted Bob Reynolds of Edmund, Okla., during the 47th lap of the IMCA late model stock car race on Memorial Day, and Ernie Derr of Keokuk, Iowa, took advantage to win the rain-plagued 50-lap feature before 7,000 soaked fans.
Reynolds, wheeling a 1963 Ford, had taken the lead from Derr on lap 16 and was breezing to an easy victory when the axle broke. He coasted to the pit area as Derr, flying through the mud in his ’63 Pontiac, flashed into the lead.
The program, promoted by National Speedways, Inc., was delayed two hours when rain hit right after the record setting time trials. The rain lasted for 30 minutes, and then it took another 90 minutes to work the track back into shape for racing.
The surface, still gooey and very slick, seemed to pose no problems for Reynolds early on as he glided through traffic from his sixth starting position. Once he caught Derr, he had no problems passing the defending champion.
Newt Bartholomew of Carlisle, Iowa, would take runner-up honors followed by Lenny Funk of Otis, Kan., who would take third place. Gil Haugen of Sioux Falls, S.D., would earn fourth and Reynolds would limp back out onto the track and take fifth.
Both Ramo Stott and Dick Hutcherson, the other “Keokuk Komets” were victims of bad luck themselves. Stott, bothered by a muddied windshield and overheating, tried to make a pit stop on lap 26, but skidded into a light tower, putting him out of action. Hutcherson spun on the lap 18, tagging the wall hard and ending his day.
Stott would set a new track record in time trials, touring the big half-mile in 27.10 seconds. He was the third driver to hold the record that day. Chub Liebe of Oelwein, Iowa was the first to break the old mark at 28.30 seconds and then Hutcherson momentarily held it at 27.46 before Stott, ironically, waved off a 27.02 clocking before making his final run.
Feature Results –
1.       Ernie Derr
2.       Newt Bartholomew
3.       Lenny Funk
4.       Gil Haugen
5.       Bob Reynolds
6.       Luther Poteet
7.       Thurman Lovejoy
8.       J.B. Martin
9.       Bob Bennett
10.   Ralph Wilhelm