June 21 – The 15-lap Coors IMCA modified mid-season championship seemed to be a leader’s nightmare but not for Bob Dominacki of Bettendorf, Iowa, as he took the lead with only 2 laps left and picked off his third feature win of the season at the Knox County Speedway in Knoxville, Ill., on Wednesday evening. Darrell McGee of Galesburg, Ill., the current IMCA point’s leader, jumped from his pole position to open a commanding lead only to drop out on lap 9 with mechanical issues. Rick Cox of Davenport, Iowa, inherited the top spot and he too took command only to break a trailing arm on the rear end and blowing a tire as well. Dominacki would take over the remaining two circuits and take mid-season honors. Dean MGee of Galesburg, Ill., took second and Dale Plack of Brimfield, Ill., grabbed third. 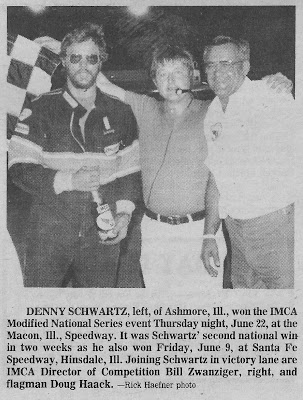 June 22 – Denny Schwartz of Ashmore, Ill., powered his Price Plumbing #21 to victory, capturing the 30-lap IMCA Modified National Series race at Macon (Ill.) Speedway on Thursday night, leading flag to flag and picking up the $500 first prize. The IMCA special event drew cars from Illinois, Indiana, Iowa, Missouri, North Carolina and Texas. Schwartz jumped out to lead the 22-car field from his pole position and was soon challenged by UMP late model veteran Dick Taylor of Springfield, Ill. Taylor tried desperately on several occasions to pass Schwartz but couldn’t get the bite he needed running the low groove. Schwartz, running the high side of the tight oval, never made any mistakes and although several cautions kept the action close to the end, Schwartz held on, crossing the stripe first ahead of Taylor, Mike McMahon, Bryan Board and Al Crawley.
June 23 – Defending champion John Sernett of Bloomington, Minn., captured his first championship sprint car feature of the year a Red Devil Speedway in Hartford, S.D., on Friday night. Sernett jumped into the lead on the first lap and was able to keep a comfortable distance between him and runner-up Gordy Vogelaar of Round Lake, Minn., the remainder of the race. They were followed by Gary DeWall of Jackson, Minn., Rod Henderson of Beresford, Minn., and Randy Rosenboom of Rock Rapids, Iowa. Kenny Hansen of Nunda, S.D., got by Jim Lindberg of Sioux Falls, S.D., with 2 laps to go to take the win in the 360 cubic engine sprints. Lindberg had run strong and led the entire race before fading with only a couple of laps to go.
June 24 – Doug Wolfgang of Sioux Falls, S.D., came home to the track in which he claimed four Knoxville Nationals titles and came away the victor in the World of Outlaws feature event at the Marion County Fairgrounds in Knoxville, Iowa, on Saturday night. Wolfgang, who had claimed the preliminary feature only 24 hours earlier, guided the D.P Motorsports Schnee chassis from his row two starting position to the lead on lap 10. He would never relinquish the lead during the 25-lap affair and collected $8,000 in winning for the 48th time at the historic half-mile. Dave Blaney of Cortland, Ohio, who set quick time in qualifying (16.440 seconds) finished second behind Wolfgang after leading the initial 10 circuits.
June 24 – Scott May of Peoria, Ill., continued his domination of the UMP late model division at Spoon River Speedway in Canton, Ill., as he won his fourth straight feature there on Saturday night. May took the lead early and held off a hard charging Randy Booth of Springfield, Ill. Bob Freeburg of Metamora, Ill., and Allen Thomas of Wapella, Ill., had a duel of their own for third and fourth as they switched back and forth throughout the feature, with Freeburg getting the nod. In other action; Gary Cook of Washington, Ill., continued his winning ways in the econo late models as he grabbed his fifth victory of the season and John Anderson of Lexington, Ill., won the IMCA modified main event.


June 25 – Rich Bickle scored the second win of his ARTGO career and his first NASCAR/ARTGO Challenge Cup Series win Sunday afternoon in the $60,060 “Special Export Light 200” at the Lacrosse Fairgrounds Speedway in Salem, Wis. Bickle took the lead on lap 15 from ARTGO point leader Joe Shear then held off a tremendous last lap charge by the cagey veteran to beat Shear to the line by less than one foot. With the victory, he became the seventh different winner of the 1989 season. Finishing behind Bickle and Shear were Mark Day with an outstanding run, Scott Hansen who came from a lap down to finish on the lead lap and Steve Holzhausen with a steady 200-lap run.
June 25 – Dave Farren of Des Moines, Iowa, won the IMCA modified feature Sunday night at Stuart (Iowa) Speedway, beating Stuart’s Craig Cooper and Earlham, Iowa’s Terry Pruitt by a car length at the checkered flag. John Henely of Norwalk, Iowa, was the feature winner in the IMCA stock car main event overt Kevin Gyles of Des Moines and Fred Day of Earlham. In enduro action, Jeff Anderson of Atlantic, Iowa took the win over Bill Bonnett of Knoxville, Iowa, and Bob Van Scoy of Madrid, Iowa. 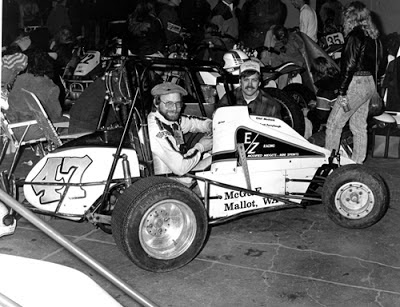 Bob Mays
June 25 – Four years of frustration and near misses finally came to an end at Cornhusker Raceway Park in Waverly, Neb., as Hawkeye Racing News photographer and modified midget racer Bob Mays of Lincoln, Neb., took home his first career “A” feature on Saturday night. Mays cut through traffic from his fourth row starting position to move into fourth position. After several attempts on the high side of the track, he slid past Chuck Kidwell of Harvard, Neb., for third and then moved past Rick Asche of Lincoln for second spot. With 12 circuits to go in the 30-lapper, Mays drove by race leader Mike Love of Lincoln coming off of turn two and on to an easy victory. 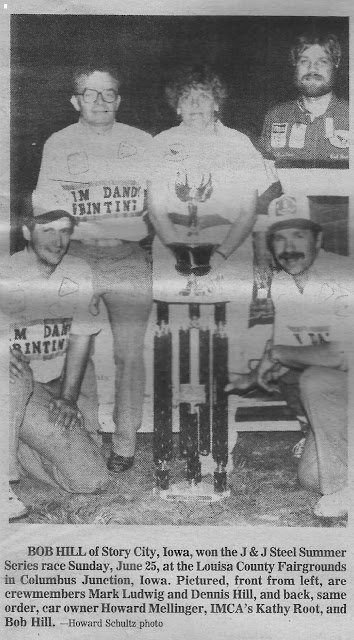 June 25 – The J&J Steel Summer Series for IMCA late models made its scheduled stop at Columbus Junction (Iowa) Raceway on Sunday night and the racing was just like the weather, hot and sticky, as Bob Hill of Story City, Iowa, went home the winner of the 35-lap feature. Darrell Dake, the 62-year-old veteran from Cedar Rapids, Iowa, grabbed the lead on lap 1 and built a half a lap lead on the rest of the field until a restart on lap 10. Dake led everyone into turn one on the restart but going down the backstretch he developed engine troubles and Bob Hill inherited the top spot with Steve Borts of Ames, Iowa, Ted Pallister of Wapello, Iowa, and Tom Hearst of Wilton, Iowa, in hot pursuit. Hearst would move past Pallister and then Borts as the race stayed green until a caution flag flew on lap 33, allowing Hearst one last shot at Hill. Hill, however, would stay cool and calm on the final restart and pull away for the win. Hearst would cross the finish line in second but a post-race inspection found the veteran driver in violation of the weight rules, so he was disqualified. Steve Watts of Danville, Iowa, Steve Borts, Jay Johnson of Middletown, Iowa, and Lem Blankenship of Keokuk, Iowa, would round out the top five.
June 25 – “The Racing Auctioneer” Charlie Sentman outbidded “The Racing Farmer” Roger Long in a real barnburner to capture the 25-lap UMP late model main event at the Vermilion County Fairgrounds on Sunday night. Sentman powered into the number one slot at the drop of the green with Long right on his bumper. Long tried to get by Sentman on numerous occasions, first on the inside and then on the outside, but couldn’t make the pass. Sentman would hold off Long at the wire by a car length, posting his first feature win of the season at the track. Kevin Weaver, Roger Cary and Jim Leka rounded out the top five positions. Denny Schwartz, proving to be the hottest modified driver in the country, scored his seventh feature victory of the season winning handily.
June 25 – Jeff Jones of Davenport, Iowa, Jeff Bair of Solon, Iowa, and Rusty Zook of Coralville, Iowa, each claimed a feature win on mid-season championship night at Tipton (Iowa) International Speedway on Sunday night. Jones took the lead on the second lap of the IMCA modified feature and led the remainder of the way but not without pressure from Johnny Spaw of Cedar Rapids, Iowa, and John Irwin of Lost Nation, Iowa. Bair, a first year pro stock driver, posted a clean sweep in his division, outracing Marty Beckler of Oxford, Iowa, in the 20-lap finale. Zook also had a clean sweep and led wire to wire in the 17-lap hobby stock main event.
June 25 – Thirteen-time track champion Ken Essary of Galena, Mo., charged by Chris Powell of Rogers, Ariz., on lap 22 to win his second late model feature of the season Sunday night at Monett (Mo.) Speedway. Essary and Powell were chasing race leader Darrell Mooneyham when the defending track champion exited with a right rear flat tire on lap 20. Bill Street, Al Purkey and Bill Frye rounded out the top five finishers. Johnny Bone Jr. took the lead on lap 12 and held off Dave Williams to take the checkered flag in the 18-lap IMCA modified feature and Joe Woodard of Crane, Mo., won his first-ever feature as he outran the 21-car street stock field.