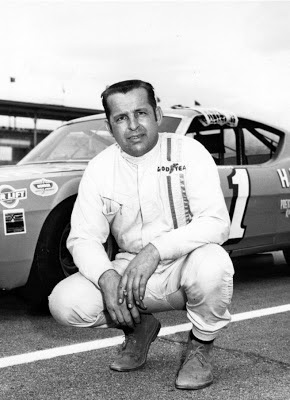 Tom Bowsher
Kaukauna, Wis. (June 27, 1971) – It was just about a month ago when Jack Bowsher, a popular driver on the USAC circuit, was leading the late stages of the Wisconsin International 200-lapper, when a frustrating thing happened…he ran out of gas.


So Tom Bowsher, Jack’s younger brother who is making his mark in ARCA (Automobile Racing Club of America) made sure he didn’t make the same mistake.


“I made two pit stops for gas today – I wasn’t going to run out,” Tom emphasized after breezing to a six-lap victory in the broiling Wisconsin International 300 on Sunday afternoon and picking up a check for $1,775.


The Springfield, Ohio native nearly led all the way in his 1971 Ford Torino and was challenged only briefly by ARCA point’s leader Ramo Stott of Keokuk, Iowa and Andy Hampton of Louisville, Ky., before a crowd of 1,800.


Stott, piloting a 1971 , had the lead through the first two laps of the grueling 150-mile contest. He had won the pole position on Saturday.


But Bowsher, who started along side the Iowan on the front row, overtook Stott on the third lap and gradually widened his lead to the better part of a straightaway.


Stott remained within hailing distance to assume the front-runner’s spot again on lap 118 when Bowsher pitted. But when Stott had to go in for fuel himself on lap 150, Bowsher regained the advantage.


Stott’s bid for the victory ended on lap 212 when his car began smoking badly on the backstretch and then fire broke underneath his car. Stott gave the crowd a scare when he crawled out of the car and dropped weaked-kneed to the ground. He was not injured from the fire only exhausted from the race – run in temperatures well over 100 degrees on the track surface.


also fell victim to heat prostration after dueling with Bowsher bumper to bumper from lap 70 to lap 90. His car finally gave out on the 101st tour.


With his two toughest competitors gone, Bowsher had little to do but stay alert and avoid trouble for the final 86 laps. “I was never really pushed,” Bowsher said afterwards in victory lane. “Everything worked beautifully.” Despite the hot racing surface, Bowsher never changed his tires once.


With Bowsher taking home the top money and a beautiful Miller High Life trophy, second place went to Bill Clemons of , who gunned his small 1971 Hornet through 294 laps to collect $950 for his efforts. A Brooks, , driver who goes by the name of A. Arnold finished third in a 1971 Camaro and pocketed $625.