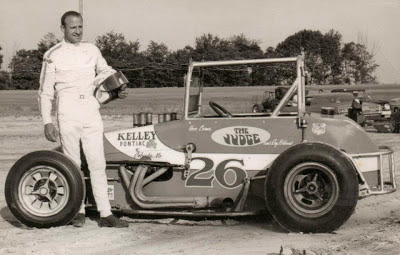 But when climbs into the #26 Miller Fertilizer Special on Saturday nights at Capital Speedway, and Russell slips into the #87 Check Office Equipment Special, brotherly love goes out the door.
Both men have but one thing in mind - try to beat all other drivers to the finish line and most of all the other Hibbard.
“They’re as close as any two brothers could be when they’re sitting in the living room,” says Mrs. Shirley Hibbard, 's wife. “But would rather outrun Russell than anybody else on the track.’
And both super-modified drivers will tell you the same thing.
Russell, who is 40 and the older of the two, indicated that would “rather have anybody outrun him except me” but added that the rivalry ended the minute the engines were shut off.
The 33-year-old Roy, who now lives at , explains that the rivalry has been growing for some time.
“Russell and I started racing at the same time. And right from the beginning, I didn't care if I finished 20th. I just wanted to outrun those two.” The other driver Roy was referring to was Ken Taylor, who died in a tragic racing accident in 1966 at Sportsman’s in . ’s death was blow to racing in but was probably a bigger blow to the Hibbards. It was with that the Hibbards grew up and started racing. In fact, their first racing venture was a joint effort.
“They were all running Flathead Fords back then in 1955,” explained. “There was this special block which they bored out bigger. It just so happened that I had one of these blocks in my car.”
“We took the engine out of my car, bored it out and started racing. The three of us took turns driving,” continued. “I drove the first race with the car and finished second.”
More wins followed. It didn't take long for people to begin noticing just, how good Taylor and the Hibbards were.
After the Flathead Ford days, Russell and Roy both turned to engines with good success. In fact, Russell won the Missouri State Super Modified Championship in 1963 with a Pontiac-powered machine - an event which Russell considers one his biggest thrills in racing.
gained much of his reputation while driving the B and D Truck Lines Special out of Slater. He is now hooked up with a car owned by George Miller of .
However, before the Miller and B and D cars, built his own Pontiac-powered car.
A relative newly-wed, Roy was the owner of a 1957 and was needing some power for his first non-partnership venture into racing. So what else but take the engine out of the Pontiac - one of the hottest cars on the road in those days.
won a number of races with the car but his most vivid memory about the project was that his wife didn’t think much of taking the engine out of their family car. All this happened 12 years ago. And racing has changed in recent years. It’s much, much more expensive. Cars are going faster . . .
“The competition gets rougher every year. I've never seen so many fast cars as we have this year,” Russell stated. “And all the drivers are so eager to get to the front.”
“And racing is getting more dangerous all the time,” Russell, who is the father of three girls, stated. “Let’s say you are starting in the middle of the field. To win, a driver has to get to the front. And to get to the front he has to take chances.”
“No, I've never had any desire to drive at or in any of the sprint car races,” Russell, who still lives in the hometown of Slater, added. “I think the driver needs a little protection. I'm all for these cages.”
All super-modified racecars are required to have roll bars in front of and behind the driver with two bars connecting the roll bars. These bars form a protective cage around the driver. However, sprint cars, which look like the old front-engine racers, have only the roll bar behind the driver's head.
“I just wouldn’t drive one of those,” Russell said, “although I've had a lot of chances to drive sprints.”
“I’ve got a family that thinks something of me and I think a lot of them,” the veteran driver continued. “And I think I owe more to them than to take chances in a sprint car.”
When asked about his family worrying about his safety. Russell answered, “They all go to the races. But she (his wife) and the kids all wish I’d quit. And I think I'm going to quit before long.”
’s outlook on racing is a little different was points champ at three tracks in 1968 – , , and . He also won the Missouri Slate Championship last year, and has already bagged the1969 Memorial Day Super - Modified Classic at .
says, he too, has had offers to drive sprint cars. And there is a chance he might accept such an offer at a future date.
“But now I would like In find a good, late model stock car to drive on Saturday nights and enter in the State Fair race in August. That's what I’m looking for right now,” explained.
“Mom was always after us to quit racing,” he continued, “but when I do, I want to make sure I’m ready to quit. As long as I can run in the top two or three, I'm going to hang around.”
While Russell’s career may be drawing to a close, feels he has plenty of racing left.
But not matter how long their careers last, the Hibbard brothers - Russell and Roy have already made their mark in racing circles as two of the hardest-charging drivers - who also practice brotherly love.