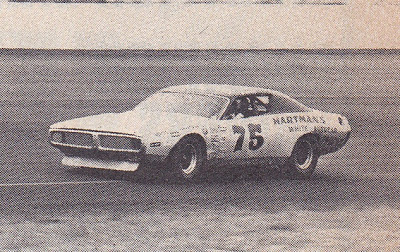 
The , driver fought off the constant challenge of relative unknown Terry Ryan to win his second consecutive feature, and third overall, in six USAC events this season.


Hartman, who changed the gear ratio in his racer after seeing the track, also took the lead away from Norm Nelson of , in the United States Auto Club’s stock car point standings with the victory.


“I went to a different gear as soon as I got here,” commented Hartman after picking up $1,385 in earnings at the half-mile paved speedway. “I heard it was a little more banked than it was.”


Nelson, the top qualifier at 20.85 seconds in his ’74 finished third as the only other racer on the same lap with Hartman and Ryan. Hartman, who won an unprecedented third straight season championship last year, now stands at 1,071 in the point standings for 1974 after picking up 200 more in Sunday’s victory. Nelson is second at 1,040 and Don White of , third with 731.


's entry Sunday, a 1973 Camaro owned by Pete Geldhof of Bridgman and drive by Bob Schippers of , qualified eighth at 21.70 seconds but blew a tire and spun out on the third lap. After another blown tire and 31 laps of racing, the Terhof Enterprise car was black flagged on lap 75.


“We blew two new tires and hit debris on the track both times,” stated Geldhof. “When he (Schippers) was running he was just passing them at will...we’ll be back.”


The race marked the first appearance of major league racing in the area, but the fan turnout was a disappointment for Hartford Speedway Promoter George Malaski, who estimated the crowd at about 800. The USAC event carried an overall $8,000 purse, and Malaski isn't certain at this time on the future of USAC stock car racing on the track.


Hartman and Ryan both thought the speedway offered one of the nation’s best half-mile paved tracks.


“It’s one of the better ones,” declared Hartman. “I was sorry to see that there were not more people out.”


“It’s nice and smooth and you can pass on it,” added Ryan with his praises.


Hartman, who qualified second fastest at 20.96, took the lead from pole on the 33rd lap of the 100-lap feature and never trailed again. Ryan moved into second on the 37th lap and stayed there the rest of the way.


“Butch was just running a little bit harder than we were, noted Ryan. “I just didn’t have enough coming off to get by him.”


Ryan, who hails from Davenport, , blew a tire in warm ups and disappeared from view after going off turn two. He returned to qualify fifth at 21.27 seconds in his new Chevy which was being raced only the second time. The former pit man for Mel Kenyon who posted his highest finish in three years on the USAC circuit, was eighth the previous week at .


There were four yellow lights for a total of 30 laps in the 50-mile race, but there were no caution flags out after the 40th lap. The race took 42 minutes and nine seconds, with Hartman having an average winning lime of 71.174 miles per hour.


The 16-fastest qualifying cars were in the feature, along with the top four finishers from the 15-lap semi-feature. Ken Rowley of , won the semi-feature in 5 minutes and 38.24 seconds while Dave Decker finished second, Lefty Robinson third and Bob Whitlow fourth.


Nine of the top 10 USAC stock car point leaders were at the race, where a total of 26 cars qualified. There were 13 cars running the end of the feature race.


Going to the pits with tire problems with Schippers was Darnell. George Coonrod went out with oil pressure problems. Jerry Wolland had troubles with his car’s rear end. Bob Brevak blew a head casket, Jigger Sirois had handling difficulties and Lefty Robinson was unable to return after going off the track.