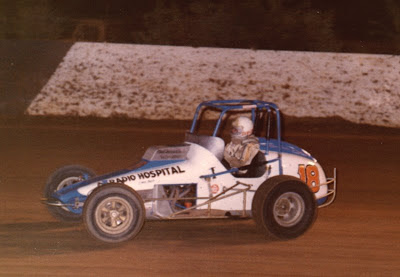 Doc Dawson
(June 22, 1969) “You can’t realize just how fast they’re going,” claimed USAC sprint car newcomer Doc Dawson of Lima, Ohio, a man who never was a slouch behind the wheel of a race car. “They just go a little bit faster than I accustomed to going.”


Doc left the area modified ranks this spring and jumped into the big league of auto racing - the United States Auto Club sprint division - for what he hopes will be an eventual shot at the 500.


“I’ve learned more in my five or six shows with USAC,” said, “than I have in three or four years driving the super modifieds. I’m getting a lot of experience.”


His biggest accomplishment to date came two weeks ago at Eldora Speedway when he set fast time on the half-mile high-banked dirt track with a time of 18.33.


“I really wasn’t trying for fast time,” laughed a pleased Doc. “I just got in the high groove and went.”


“I’ve never won a feature race at Eldora,” he explained. “And I thought I had one.”


had worked his way up from the sixth starting position into the lead by the 16th lap. “I had a real good chance to win it,” he said, “but something knocked a hole in the oil pan.”


With four laps to go, the car ran out of oil and Doc was forced to shut off. Bruce Walkup inherited the lead and Larry Cannon eventually took the victory. Walkup is one of the most difficult men in racing to hole off, but Doc had the race all but wrapped up when misfortune struck.


His luck was even worse earlier this year. In the first show at Eldora, Doc set third fastest time in qualification and was doing an excellent job in a heat race when he caught a rut and landed upside down, through for the day.


“I was kind of discouraged at first,” Doc admitted. “I just wasn’t making any money. I even thought about dropping out. My biggest problem was that I lacked experience.”


began racing at the old Allentown Speedway back in 1963 and in 1965 he began driving the super-modifieds. “I never really had top equipment before this year,” he said.


With the encouragement of several other USAC drivers, Doc finally started driving like he thought he was capable. “USAC has treated me real good,” said. “They want to help you. Many officials and drivers come around and volunteer.”


Cy Fairchild, a relative newcomer to USAC from , has been a key factor in Doc’s improvement. “"Fairchild has helped me quite a bit on the pavement,” he explained. “He’s given me a lot of tips. I’d never driven a four-bar torsion car; he’s given me pointers on how the car works.”


Doc’s had a harder time adjusting to USAC since most of his experience has come on dirt tracks, while 70 to 80 per cent of the sprint races are run on asphalt. “I've had to learn to drive pavement,” he stated. “The banked tracks are pretty easy, but on a flat track like New is where experience shows.”
“On dirt you can make mistakes and get your car back; but on pavement if you get too far out of shape, you start sliding and there’s not much you can do.”


has also gotten considerable help from his car owner Gus Hoffman of .


“Gus has been racing USAC for quite awhile,” he said. “He gave Bud Tinglestad his first ride.”


“He knows how to set up the car for the different tracks, and that helps. A guy really needs this, especially someone who lacks experience.”


But once the chauffeur settled down, he’s become really excited over his move to USAC.


“Once you’ve run two or three shows,” he said, “you know it’s the type of racing you should be in. The biggest difference between USAC and the modified ranks is the quality of drivers and equipment,” he said.


“In the modifieds, there are maybe six or eight good drivers and cars in a race, but in USAC all 20 are good drivers with good equipment and anyone is capable of winning.”


“They don't make many mistakes, and most of them are not their fault. Usually, it’s something mechanical that goes wrong to cause trouble. If you’re following someone, you don't have to worry about him and looping it out.”


Doc has also learned in his brief USAC career that qualifying is important part of the game since none of the heat races are inverted and only the first six places of the feature are switched around.


“If you are up at the front,” he explained, “you can concentrate on making the car go. You can just turn it loose because you worry about passing and traffic.


“I’ve always been told that it’s easy to catch a guy,” Doc chuckled, “but it’s something different to pass him.”


“I’ve also learned that in USAC, if you're going to win, you have to go hard the whole race. In modifieds you can often get out to a lead and slack up for a few laps, but not here, all 20 cars starting a race are capable of winning.”


Doc, of course, has some plans mapped out for the future. He hopes to pick up enough experience in the sprints to land a ride on the USAC championship circuit. “I'd like to try to stay with USAC and then get a championship ride,” said. “And then someday go on to .”


Doc would like to land a champ ride next year, but he realizes that is a difficult length of time. But Doc will not be in any hurry for he knows that he needs a bit more experience before he will become a competitive and consistent driver. He further knows that this takes time.


It has taken him-more than five years to get as far as he is today. “I just hope to keep improving and advancing,” he added, “and maybe someday I’ll be good enough to make a living driving a racecar.”


Race car drivers with the ability and desire that Doc has don’t come along very often. With a little bit of luck, he’s going to be earning that living driving a race car in the very near future.