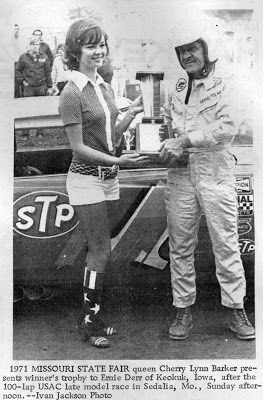 It was a struggle of 73 laps for Derr, the 12-time champion of the International Motor Contest Association circuit, who started on the front row and was never worse than third place throughout.


A three-car tangle on lap 73 – one of the cars driven by Lem Blankenship, also of Keokuk, who was in the lead at the time – and a spin out by Jack Bowsher of , who was in second place, allowed Derr to retake the lead.


It was easy sailing the remaining quarter of the race for Derr, driving a 1970 Dodge Charger.


Irv Janey of Cedar Rapids, another IMCA veteran, finished second in a ’71 Plymouth Roadrunner, while Bowsher stormed back to take third in a ’71 Ford Torino. The first three were the only drivers on the lead lap after 50 miles of racing.


Bowsher, who posted quick time during qualifying with a time of 25.64 seconds, and Derr, who timed in at 25.70, started in the front row. Both drivers bettered Derr’s old mark of 25.71 seconds, set last August.


Derr made a daring move on the fourth turn of the first lap to pass Bowsher and the Iowan then led for four more. Bowsher, showing great driving skill, regained the lead on lap 6 and led through lap 68. Blankenship, who charged the entire time he was in the race, attempted to slip past Bowsher on the low side coming out of turn four, but hit the Ohioan on the left front quarter panel and sending him into the cement retaining wall. Bowsher recovered, however to maintain second place.


On lap 73, two slower cars that had already been lapped several times – Roland Earley and Bud Schroyer, both of Toledo, Ohio – tangled in turn three, right in front of Blankenship. Blankenship had to room to maneuver, crashing into both cars and then the outside fence.


Bowsher, in close pursuit, deliberately spun his car to avoid all three, which he did. Derr, watching the whole melee develop, slipped by all four cars on the low side and won going away. Janey also eased past Bowsher to claim runner-up honors.


Ramo Stott of , the reigning ARCA champion, had fifth fastest qualifying time but blew an engine midway through the contest after holding fourth place the whole distance. Butch Hartman, third fastest qualifier, suffered a broken axle rear axle and limped towards the finish.


Because of the overcast conditions, the entire field of 27 cars was placed in the feature. The drivers competed for an $8,500 purse of which Derr received $1,700. He declined to drive in the trophy dash, which was won by Hartman.


There were three yellow flags during the race, which took 50 minutes and 46 seconds to complete. Derr’s official speed was 60.934 miles per hour. Only 12 cars were running at the finish.


“I want to win them all,” Derr said after the race. “This one doesn’t mean any more than the others. I do think about some of the guys out there running a little over their heads and trying to make it a 100-lap trophy dash.”


“I blew a hole in the radiator with 5 laps to go and had to ease up a bit,” he continued. “I noticed the temperature gauge went sky-high.”