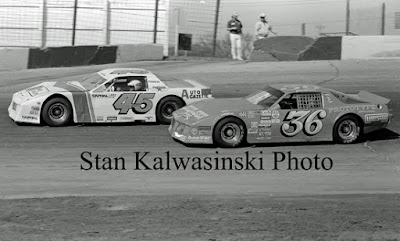 Rich Bickle (45) leads Joe Shear (36) during the ARTGO Spring Classic at Rockford.  Shear would on to win the 86-lap feature. - Stan Kalwasinski Photo


Rockford, Ill. (May 4, 1986) – Joe Shear continued his domination the ARTGO Challenge Series slicing through the field from his 12th starting position to win the ninth annual Spring Classic at Rockford Speedway on Sunday.

Rich Bickle Jr. edged into the lead on the first lap from his front row starting position with Dave Weltmeyer second and Don Leach in third. With 10 laps complete, Shear started slicing his way through the field, using the tough inside lane with Dick Trickle trying to keep up in his V-6 powered Chevrolet Celebrity.

The yellow flew for the first time on lap 32 and again on lap 34, which sent Jim Weber to the sidelines. Those would be the only two cautions of the main event.

With the green flag out again, Bickle and Shear were at the front with Weltmeyer running third. For the next 20 laps, these two Wisconsin hot shoes kept the fans on the edge of their seats as Shear tried every line to gain the top spot.

On lap 55, the top six – Bickle, Shear, Weltmeyer, Terry Baldry, Bobby Dotter and Trickle – were nose to tail. Finally, on lap 57, Shear ducked to the inside, shared some paint with Bickle, and took the lead coming out of turn four. He would hold the lead from there beating Bickle to the checkers by a quarter of a lap.

Meanwhile, Trickle’s V-6 came to life under the long green period and he proceeded to pick off Dotter, Baldry, and Weltmeyer to finish third.

After the win, Shear was asked what his secrets were to running the tough groove in the first tow ARTGO dates. “It’s the chassis,” explained the six-time National Short Track Champion. “We only ran this car four times in ’85, but we knew it was just what we needed to make a run at the ARTGO title this season.”