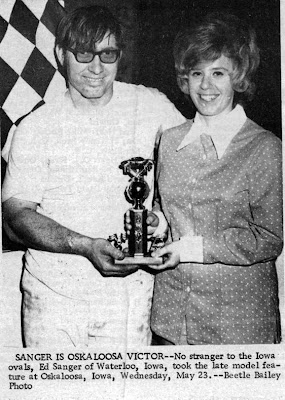 May 23 – Ed Sanger of Waterloo, Iowa, became the third super stock winner of the season at the Southern Iowa Fairgrounds in Oskaloosa on Wednesday night. Sanger showed his championship form by taking the top spot on the first lap and leading all 25 laps for the victory. Darrell Dake of Cedar Rapids, Iowa, chased the yellow #95 but was never able to catch the speedster.  John Moss of Iowa City, Iowa, would finish a distant third followed by Bob Bonzer of Liscomb, Iowa, and George Barton of Ankeny, Iowa. Jim Brown of Martinsburg, Iowa, scored his third straight feature victory in the sportsman division.