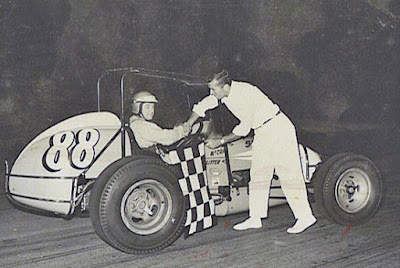 Schererville, Ind. (May 19, 1963) – The hot-running chauffeurs of IMCA went on another record-busting run on Sunday afternoon and this time it was a youthful Jim McCune of Toledo, Ohio, in the Bob Price Chevy who walked away with the lion’s share of honors at Illiana Motor Speedway.

McCune started the day by rewriting the one-lap qualifying mark when he turned the half-mile oval in 22.02 seconds. That erased from the books the mark of 22.22 seconds set by Mickey Shaw in May 13, 1962.
The Ohio driver didn’t get that honor all by himself as Jerry “Scratch” Daniels of St. Paul, Minn., later duplicated the feat to share the record with McCune.
Five other drivers bettered the old mark and another tied it as Gene Van Winkle and the National Speedways’ gang conducted their third straight program in which the record book took a terrific beating.
Gordon Woolley, Johnny White, and Arnie Knepper all turned in one-lap times of 22.04 seconds and Ray Duckworth drove 880 yards in 22.12 seconds. Hard-charging Bob Coulter equaled Shaw’s old time.
In the feature, McCune jumped into the lead at the start and then out-dueled Johnny White in a wheel to wheel battle for 25 laps to set the second record of the day.
McCune’s time for the 12.5-mile jaunt was 9 minutes and 25.79 seconds as compared to the track record of 10 minutes and 27.43 seconds set last season by Johnny Rutherford.
As hot as the McCune-White duel was for top money, Woolley and Pete Folse stage one just as warm for the show spot with Woolley nipping the three-time IMCA national champion at the wire.
Daniels, running a close fifth at the time, spun completely around in turn four on the 21st lap, but recovered beautifully and closed fast to nab eighth place money.
Johnny White won the trophy dash while McCune, Jerry Blundy and Buzz Gregory were heat winners. McCune’s time of 3 minutes and 1.07 seconds in the first heat was a new IMCA record for an eight-lap heat on a paved half-mile. Arnie Knepper won the 10-lap semi-main over Woolley and Dick Atkins.