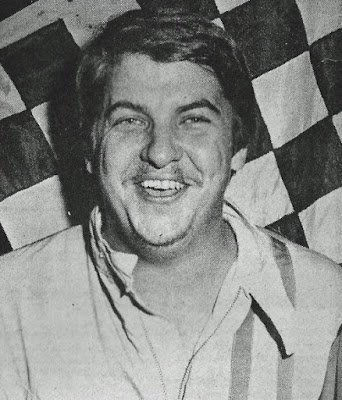 Des Moines, Iowa (May 14, 1977) - Bill Rice of Des Moines learned Saturday night that a race driver does not depend altogether on a fast track for a victory.

All Rice did was come from behind to claim the 25-lap late model feature before a crowd of 7,000 at the State Fairgrounds, then take time out to belittle the condition of the track.

“Boy, was that track slow and terrible,” said Rice, owner of a wholesale tire store. “It was like running in a Sunday afternoon race.”

Above-normal temperatures at this time of year played a big part in the rough condition of the track, said promoter George Barton.

“They would make a better show if they watered down the track early in the day and then once more before starting time,” answered Rice, who drove a 1977 Camaro.

Rice, who started inside on the second row after winning the third heat, went high on the fourth turn lap 20 to overtake leaders Curt Hansen of Dike and Ed Sanger of Waterloo and seemed to gain momentum.

“I was staying inside on the turns and the only way anybody was going to pass me was if they went to the outside,” said Hansen, who won last week’s feature race. “My tires got hot and lost some weight on the turns.”

“But, hey, once Rice got by me there wasn’t anyone going to get him,” added Hansen, who captured the first heat.

Bill Davis of Des Moines continued his winning ways in the sportsman feature, taking his third victory in as many attempts. Davis led from start to finish in the race delayed by six caution flags. He also had some unkind words about the track.

“It was a real dry and slick but my car ran good,” explained Davis, who, in his 1972 Camaro, also took the first heat.

Bill Carter of Des Moines was second, Rocky Hodges of Des Moines third and Denny Rosenberg of Grimes made a flashy comeback to finish fourth.

Rosenberg started in the sixth row of the fourth heat but had to pull out after three laps when his 1971 Camaro overheated.

He then was declared the winner of the 10-lap consolation when he was the first driver to cross the white flag before a red flag was waved.

Three cars collided in the late-model consolation, resulting in the one-week suspension of Lefty Robinson for what Barton termed “intentional roughness involving the chance of personal injury.”

Robinson’s 1977 Camaro clipped Roger Tapper’s 1977 Camaro on the fourth turn of the tenth lap. Robinson lost control, bounced off the retaining fence along the straightaway and hit the incoming Arnie Braland of Boone.