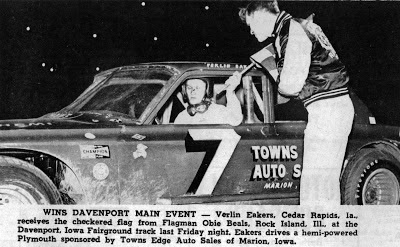 May 12 – Verlin Eaker of Cedar Rapids, Iowa, wheeled his red 1964 Plymouth hemi to a feature victory in the late model modified feature at the Mississippi Valley Fairgrounds in Davenport, Iowa, on Friday night. Eaker flashed across the finish line ahead of Darrell Dake, also of Cedar Rapids. A couple of other Cedar Rapids chauffeurs, Bill McDonough and John Schlemmer, grabbed the third and fourth respectively. Ray Cox of Davenport continued his mastery of the novice division as he copped his third feature win of the young season.
May 12 – Super stock racing opened at the Central Iowa Fairgrounds in Marshalltown, Iowa, on Friday night with Darrell Devries of Charles City, Iowa, picking up the feature win. Devries made it a clean sweep as he won the first heat and then came from dead last to win the “A” semi-main. Joel Rasmussen of Ames, Iowa, was a close second in the feature after winning the “B” semi-main.
May 13 – Chuck Cox of Boone, Iowa, captured the super stock win at Dayton (Iowa) Speedway on Saturday evening, beating back challenges from Wes Smith of Story City, Iowa, and Butch Householder of Algona, Iowa to take the first prize money. George Barton of Ankeny, Iowa, set a new track record in time trials, touring the quarter-mile in 17.16 seconds.
May 13 – Ron Jackson of Burlington, Iowa, and Kenny Ellis of Mount Pleasant, Iowa, captured feature vents Saturday night at 34 Raceways Park before more than 3,600 spectators. Jackson won the “A” feature in semi super modified competition and Ellis grabbed the checkered in the “B” feature. Jack Alter and Ron Lekander, both of Burlington, picked up most of the marbles in the cadet class. Lekander, the 1966 cadet champion, grabbed the “A” feature while Alter won the “B”. Duane Stoneking of Oquawka, Ill., set a new track record in qualifying for modifieds, when he clocked in at 18.73 seconds.
May 13 – Red Droste of Waterloo, Iowa, held off Chub Liebe of Oelwein, Iowa, to claim victory in the super stock feature at the Buchanan County Fairgrounds in Independence, Iowa, on Saturday night. Droste and Liebe ran side-to-side and nose to tail for the entire 20 laps before Liebe spun slightly on the last lap, allowing Droste to roar across the finish line first. Cal Swanson of Reinbeck, Iowa, took third, followed by Darrell Dake of Cedar Rapids, Iowa, and Paul Fitzpatrick of Rochester, Minn.
May 13 – Shorty Selsor of Des Moines, Iowa, regained his winning form at Stuart (Iowa) Speedway on Saturday night, capturing the 20-lap super stock feature after yielding the main event to Matt Moro, also of Des Moines, last week. In what was a tight duel from start to finish, Selsor took the lead from Moro on the final lap when Moro blew an oil line on the back stretch. A large crowd, estimated at 1,320, attended the program with 29 cars checked into the pits.
May 13 –Mark Mosier of Washington, Iowa, driving a newly built 1957 Pontiac, took top honors in Mississippi Valley Speed Club action at the Louisa County Fairgrounds in Columbus Junction, Iowa, before a crowd of 3,100. Mosier held off a stubborn John Moss of Iowa City, Iowa, who finished a close second in his 1965 Chevy convertible. Ron Hemsted of Lone Tree, Iowa, took third followed by John Mullink of Iowa City and Tom Stewart of Washington.
May 14 – Tunis Speedway in Waterloo, Iowa, opened the racing season under threatening skies as it rained briefly on both drivers and fans. The rain failed to dampen Chub Liebe of Oelwein, Iowa, as he took the 20-lap feature race over Cal Swanson of Reinbeck, Iowa, and Red Droste of Waterloo. Bob Hilmer of Dysart, Iowa took fourth while Glen Martin of Independence, Iowa, rounded out the top five.
May 14 –Despite cold, damp weather, Peoria Speedway opened to a capacity crowd of 6,000, as Johnny Beauchamp of Atlantic, Iowa, driving the 1967 “Kartsville” #55 Plymouth, completely dominated the field of 21 drivers. He won the feature, semi-main and second heat. Beauchamp outclassed a field that included Don Bohlander of Glasford, Ill., Jim Baker of East Peoria, Ill., Don Bitner of Bellevue, Ill., and Ed Bolen of Peoria.