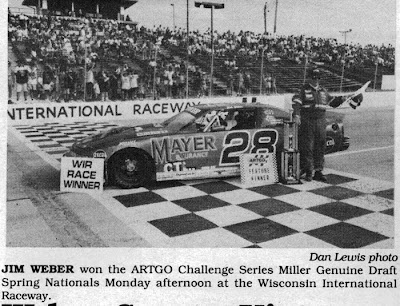 1994 -Jim Weber of Roseville, Minn., drove to an impressive win in the ARTGO Challenge Series Spring Nationals 100-lap event on Monday afternoon, May 30 at Wisconsin International Raceway in Kaukauna before a crowd of 7,899. Weber roared into the lead on lap 23 and then survived numerous cautions to win the event by a four-second margin over Steve Carlson of West Salem, Wis., and Matt Kenseth of Cambridge, Wis., who was a close third. 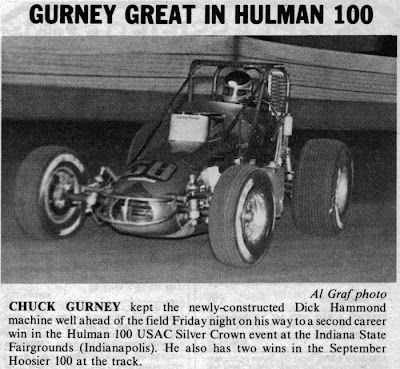 1988 - Chuck Gurney dazzled the large crowd at the Indiana State Fairgrounds Friday night, May 27 by winning the USAC-sanctioned Hulman 100 for Silver Crown Cars on the historic mile dirt. "It was hooked up so good; it was slopping over the cushion," Gurney said, describing the racing surface. It was Gurney's fourth career victory in the famed event and was worth $10,400. He led from the pole and was never headed. Initially, he was challenged by Jack Hewitt and later by both George Snider and Kenny Jacobs but nobody had nothing for the Californian. 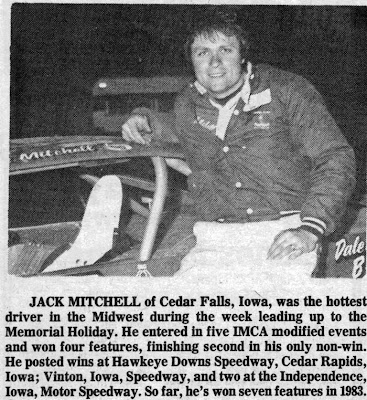 1983 - Jack Mitchell of Cedar Falls, Iowa continued to be the hottest driver in the International Motor Contest Association this season as he remained unbeaten with his third straight modified feature win at Vinton Speedway on Sunday, May 29. Mitchell, who won the 1982 point's title at Vinton, has won seven features overall this year in IMCA competition. In Sunday's 20-lap main, Mitchell held off Todd Jensen of Waterloo and Mike Schulte of Norway for the victory.

1977 - Wendell Kuehn of Rochester, Minn., took the lead on lap three and then held off bids by Leroy Scharkey and Rich Olson to win the 30-lap feature at the Dodge County Speedway near Kasson, Minn., on Saturday evening, May 28. Scharkey received the first black flag of his career when he and Olson tangled on the last lap, sending Olson to the pit area. Bob Saterdalen would claim the runner-up spot while a young Mark Noble, who won his very first late model heat race earlier in the program, took third in the feature.