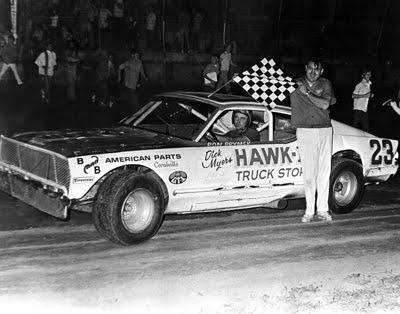 Ron Prymek of Iowa City accepts the checkers after winning the MVSC feature at Columbus Junction.

Iowa City, Iowa (May 30, 1972) - It was a profitable weekend on the Mississippi Valley Speed Club circuit for Jim Gerber of Long Grove, Larry Jenkins of Wilton and Ron Prymek of Iowa City.

The three each won trophy dashes, heat races or feature events Saturday night at West Liberty or Monday night at Columbus Junction to take the first three spots in that order in unofficial drivers point standings.

Gerber now has 49 points, Jenkins 46 and Prymek 41 to rank ahead of last week's leader, Mel Morris of West Liberty who now stands fourth with 38 points.

Gerber had his big night Saturday at West Liberty, winning the first heat and the feature, but Jenkins also picked up valuable points by finishing second in the feature and also won the trophy dash. Gerber took over the lead on the 19th lap of the 25-lap feature and held it the rest of the way in a race marred by spinouts, wall crashes and several restarts. The finishing order of the feature was protested when a couple of cars violated rule 35 (no water, oil or gas may be added on the red or yellow light).

Prymek, who won the feature at Columbus Junction a week ago, came back on Monday with a clean sweep at the Louisa County Fairgrounds half-mile to surge into third place in the point standings. Prymek won the trophy dash, second heat and the feature.

Although he did not win an event, Jenkins was again a strong third place behind Prymek and Gerber. Morris was right on Prymek's tail through two restarts but went to the pits with a blown engine on the 18th lap of the 25-lap event, marred on the last couple of laps by a passing rain shower. Ron Hemsted of Lone Tree, who is sixth in current point standings, and a heat winner Saturday night, was running fifth in the feature before pulling out with mechanical problems on the restart.
Results -