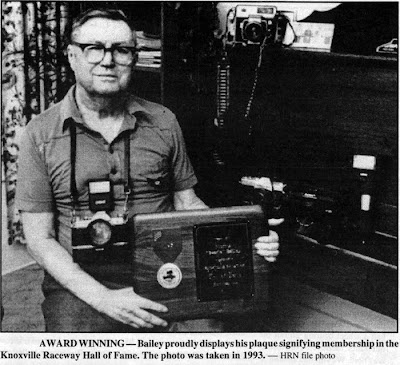 1994 - Long-time racing photographer, Morris "Beetle" Bailey died of heart failure on May 19th. The Boone, Iowa resident was 80-years-old. With a memorable name and abilities to match, Bailey carved himself a permanent place in the memories of race fans and drivers through his photography and publishing contributions to motorsports journalism.

1988 - Tom Nesbitt posted his third consecutive WISSOTA late model feature win at Red Cedar Speedway in Menomonie, Wis., on Friday, May 21. Nesbitt made shambles of the competition, jumping into the lead at the green and racing to a half-lap victory over runner Don Swearingen. In WISSOTA modified action, defending two-time track champion Mike Kelley, Jr. picked up his first main event win of the season after passing Tim Ludwigson on lap 12 of the 20-lap feature.

1983 - Gene Gennetten of Parkland, Mo., captured the 30-lap World of Outlaws Midget (WOOM) feature at the Mississippi Valley Fairgrounds in Davenport, Iowa on Friday night, May 20. Gennetten overtook early leader Mel Kenyon of Lebanon, Ind., along the front straightaway on the 17th circuit after fighting side by side for six laps with the former USAC midget titlist. Genetten then held off a hard-charging Stan Fox of Janesville, Wis., on the last lap to seal the win.

1977 - Competing for the first time this season, Ramo Stott led all qualifiers in time trials and then scored a wire to wire victory in the Indiana Classic 100-mile USAC stock car race at the Indiana State Fairgrounds on May 21. Stott's ninth career USAC victory was worth $4,275. Runner-up Paul Feldner, whose closing rush fell only inches short at the checkers, took over the lead in the USAC point's standings. Jack Bowsher, Ralph Latham and Bay Darnell rounded out the top five finishers