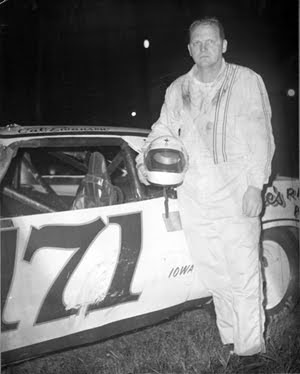 Dolan, the young hotshot from Lisbon who was performing in his 1968 Plymouth for the first time this year at the Downs, started on the pole and led the feature for 19 laps. Swanson of Reinbeck had his '69 Chevelle humming and was right on Dolan's tail, with Ed Sanger, Curt Hansen and Red Droste closing fast.

Down the back-chute Dolan got caught in traffic he was lapping and Swanson wisely took the inside and sailed home with the checkered flag. Ironically, Dolan wasn't able to recover and finished sixth. Both he and Swanson were critical of the lapped cars.

"Yes, I figured that was going to happen to Roger," said Swanson. "That's what happens when drivers don't heed the move-over flag when they are being lapped.

"It's unfortunate for him, but I just took advantage of the situation."

Dolan appeared stunned. "I wonder where the black flag was," he said. "If they don’t move over after two warnings, they’re supposed to be flagged off the track. I had to run high because that's where the only groove was. But the traffic I was passing stayed up there, too."

Swanson ended the two-week victory streak of Droste, the defending champ on the quarter-mile dirt oval. But the Waterloo red head finished second, followed by Bill McDonough of Cedar Rapids, Curt Hansen of Dike and Ed Sanger of Waterloo.

Dolan did win the 10-lap second heat, while Droste copped the 6-lap fast dash. Roger Kruse of Independence won the 15-lap consy and John Webb, also of Independence was the first heat winner.

Attendance on the brisk evening was 3,419.

Roger LaCoursiere of Cedar Rapids became the third different driver in as many weeks to grab honors in the novice 20-lap feature. Roger also won the first heat with Red Dralle of Evansdale grabbing the win in the second heat.