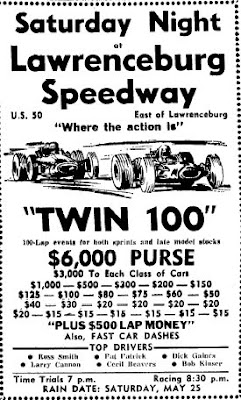 Lawrenceburg, Ind. (May 18, 1968) - A spectacular auto racing show is on tap Saturday night, May 25th at Lawrenceburg Speedway.

Billed as the “Lawrenceburg Twin 100”, the program will consist of separate 100-lap championship races for both sprint cars and late-model stocks, plus fast car dashes in each division.

Topping the sprint car division will be such tap speedsters as Bob Kinser of Bloomington, Ind., current leader in the Lawrenceburg sprint car point standings; Don Nordhorn of Wadesville, Ind., racing teammate of Kinser in the Bloomington Raceway Chevy Specials; Dick Gaines and Cecil Beavers, both of Mitchell, Ind. in the Diz Wilson Chevy Specials; and Larry Cannon of Danville, Ill., in his Tri-R Construction Special.

Heading up the competition among the late-model stocks will be rivals Pat Patrick and Ross Smith, both of Sayler Park, driving two of the “hot” new cars in the area this year; Earl Smith of Richmond, Ind., former stock car champion at the speedway. Bob Smith, also of Richmond; Joe Burdette and Bob Creviston from the Cincinnati area; and young ace John Mugavin of Glen Este, Ohio.