1994 - Kim Mock roared past race leader and defending Interstate Racing Association champion Joe Roe with four laps remaining to capture the season opener at Manitowoc (Wis.) Expo Raceway on Saturday, May 7th. Mock powered by on the high side as the two entered the first turn on lap 16 of the 20-lap encounter. Roe would settle for second with Dave Moulis, John Tierney and Todd Daun following.

1988 - It was announced that the dirt era had officially ended for I-70 National Speedway n Odessa, Mo. A foreclosure notice was served on Monday, May 9th against Greg Weld of Kansas City, Mo., in Lafayette County Circuit Court and the facility was returned to it's original owner, Bill Roberts of Blue Springs, Mo. Weld purchased the half-mile oval from Roberts in 1981 and had changed the racing surface from asphalt to dirt. Roberts then announced plans for changing the surface back to asphalt and running five or six specials beginning in 1989. 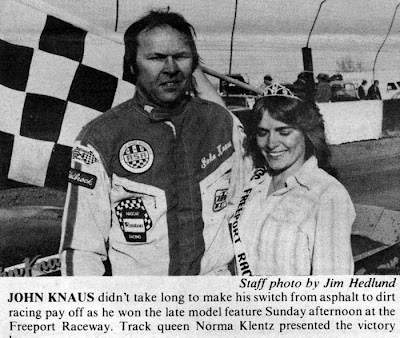 1983 -Rockford's John Knaus won the season-opening 25-lap late model feature at Freeport (Ill.) Raceway half-mile dirt oval on Sunday afternoon, May 8. Knaus' victory marked his return to dirt track competition after running asphalt for the last seven years. The 31-year-old veteran took the lead midway through the contest and outdistanced the field for the win. Bob Jaeger of Dubuque, Iowa and Jim Jeffries of Freeport finish second and third respectively. Gus Hughes of Monticello, Iowa made a clean sweep of the roadrunner class, winning both his heat and feature. 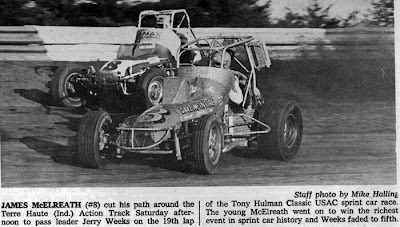 1977 - James McElreath of Arlington, Tex., posted his first career USAC sprint car victory on dirt, Saturday afternoon, May 7th, when he breezed to victory in the seventh annual Tony Hulman Classic at the Terre Haute (Ind.) Action Track. The $50,293 purse offered was the largest ever for a sprint car race. McElreath, the 23-year-old second generation star, took the lead from Jerry Weeks on lap 19 and ran untouched from there. Another second generation star, Clark Templeman, finish second in the 40-lap main event and was followed by Roger Rager, Billy Cassella and Weeks.