1949: The First Year of the IMCA Stock Car Series 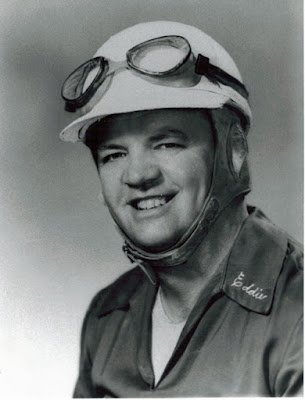 By Lee Ackerman
Omaha, Neb. - In the last few years, considerable effort has been given to documenting the early years of NASCAR. What many fans are unaware of is that before IMCA became a grass roots racing series famous for its sanctioning of over 100 weekly racing tracks across the country, it had a stock car series that for many years rivaled its southern counterpart, NASCAR.


The International Motor Contest Association (IMCA), organized in 1915, is the oldest active automobile racing sanctioning body in the United States.  J. Alex Sloan, a native of Pittsburgh, Pa., was instrumental in establishing the IMCA, and for years ran more races than all other promoters in the United States combined, all under IMCA sanction.


After Sloan’s death in 1937, his son John continued the IMCA tradition.  Under his leadership, IMCA continued to grow and reports suggest that IMCA held its first late model stock car race on November 9, 1947 in Lubbock, Tex. Certainly, the first recorded season of IMCA stock cars was 1949.


Today, late models are all specially constructed frames, mass produced on a jig at a chassis companies such as Rocket, MastersBilt, GRT or whomever. In 1949, when IMCA conducted its first year of stock car racing, many of the cars were ordinary passenger cars were driven to the track with license plates remaining on the car during the race.


As you will see in this story, many car companies were represented, some of which have been all but forgotten. What’s a Kaiser-Frasier you ask, how about a Willy’s? A Nash won several stock car races, you have to be kidding!


The first race of the season was held at the Mid-America Fairgrounds on May 30, which became the traditional Topeka Memorial Day Race.  Bob McKim of Salina, Kan., won the 200-lap feature in an Oldsmobile 88 owned by Ron Rice. Ray Rutman finished second, Eldon Burkeholder took third and Frank Winkley was fourth.


Winkley and his wife Verna would later form Auto Racing, Inc. (ARI) and for many years promoted IMCA events. The other group that promoted IMCA sanctioned events for years was National Speedways, Inc. led by Al Sweeney. 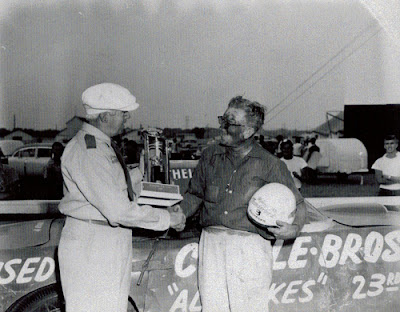 It is also reported that Hershel Buchanan of Shreveport, Louisiana won a race at the Louisiana State Fairgrounds in a Nash on the same day that may have been an IMCA sanctioned event. Buchanan had spent a number of years racing in the IMCA big car (sprint car) division prior to racing stock cars. In 1950 and 1951 Buchanan won the IMCA stock car championship.


Also, in the field was Nick Nachicas. Nachicas would later work for Winkley and ARI serving as an announcer of IMCA events for many years.


As for Jim Roper, that’s the same Jim Roper from Halstead, Kan., that won the first ever NASCAR strictly stock car race on June 19, 1949 at the three quarter-mile Charlotte Speedway. Roper pulled a Lincoln all the way to Charlotte, N.C., and ran second to Glenn Dunaway. Roper was awarded the win when Dunaway was disqualified for illegal use of rear springs.


The first National Speedways, Inc., sanctioned stock car race took place on August 20, 1949 at Cedar Rapids, Iowa with Glen Dunaway of North Carolina winning in an Oldsmobile. Yes, the same Glenn Dunaway that was disqualified at Charlotte.
A tremendous crowd of 14,000 jam-packed the All-Iowa Fair grandstand and watched Dunaway push his black 1949 Oldsmobile coupe around the half-mile 200 times in 2 hours and 22 minutes. He finished two laps ahead of Herschel Buchanan. 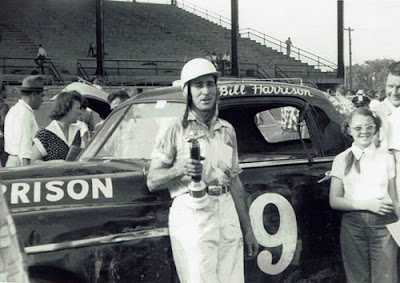 
On August 21, Wild Bill Harrison of Topeka, Kansas drove his Lincoln to the 200-lap feature win at the Mississippi Valley Fairgrounds in Davenport, Iowa, before 7,052 curious fans. Glen Dunaway followed in an Oldsmobile with Buchanan third in his 46’ Nash. The race took 2 hours, 9 minutes and 30 seconds to complete.


August 23 saw the series back at Topeka, Jim Roper of Great Bend, Kansas winning a 200-lap feature in a Lincoln.  Three days later, on August 26, Herschel Buchanan drove his Nash to victory at the Sioux Empire Fairgrounds in Sioux Falls.


On September 1, 1949, Anderson came alive and drove his 1949 Mercury to a 200-lap victory at the Iowa State Fairgrounds in Des Moines defeating highly touted Herschel Buchanan.  The car Anderson drove had been wrecked in a highway accident near Grinnell, and Anderson took possession of the car from the insurance company only five days before the race.


On September 2, at the Minnesota State Fair in St. Paul, Tom Adelman of Minneapolis drove his 1948 Kaiser-Fraiser to a win in the 200-lap event. Bill Harrison in a Lincoln and Wally Dahl in a Ford finished second and third.


Eddie Anderson scored another win on September 4, at the All-Iowa Fair in Cedar Rapids, Jack Morgan of Duenwig, Mo., ran second driving a 1941 Mercury with Dick Hobel of Cedar Rapids third in a Buick and Harlan Young of Anamosa, Iowa fourth in a 1940 Willys.


Herschel Buchanan, who set fast time by blistering the half-mile in 34.765 seconds, finished fifth after making a couple of pit stops. Anderson’s winning time was 2 hours, 10 minutes and 35 seconds. 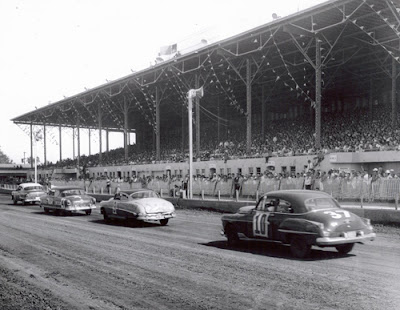 IMCA Stock Cars roll down the front stretch at the Nebraska State Fair. A standing room only crowd eagerly awaits the action.


On September 9, at the Nebraska State Fair in Lincoln, Eddie Anderson continued his winning ways once again taking a 200-lap win pocketing $500 for his efforts. Herschel Buchanan brought his Nash home second, Wayne Selzer of Omaha was third in a Ford and open-wheel ace Frank Luptow ran fourth.


Anderson kept his streak going by winning the 200-lap race at Topeka, Kansas on October 2. He then added yet another win on October 9 back at Hawkeye Downs where he completed the 200-lap affair in 2 hours and 20 minutes with Don Fischer in a '46 Ford finishing second and Sonny Ebsen in a '41 Mercury third.


The final event of the season was run on October 26 at the Louisiana State Fairgrounds in Shreveport with Buddy Keith winning in a 1939 Lincoln. For a good part of the 29 years that the IMCA stock car series raced, the series started the season and ended the season in Shreveport.


There were several other IMCA events that were reported ran in 1949, but no reliable information is available on those events. In the end, we know that Eddie Anderson in his wrecked '49 Mercury was the class of the field and usually had to battle Herschel Buchanan in his Nash for the win.


The IMCA stock car series grew to be the leading series in the Midwest for many years and in the beginning rivaled NASCAR. IMCA races at the various state fairs routinely drew 20,000 or more fans. Ernie Derr became a legend in the series, winning 12 IMCA national stock car championships, but in the end the series faded into history with 1977 being its last year of competition.