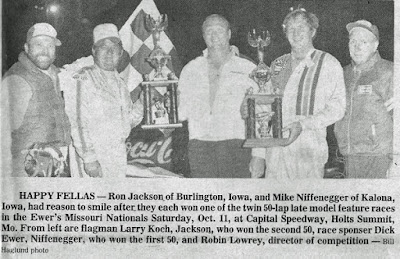 Holts Summit, Mo. (October 11, 1980) – The 1980 racing season came to an action-packed end at Capital Speedway when over 65 late models competed in the Goodyear Missouri Nationals.
Time trials, qualifying heats, and a handicap race were held on Friday night. On Saturday night, two consolation races were followed by twin 50-lap features.
Ken Walton of Viola, Iowa, set a new track record, turning the 3/8-mile in 20 seconds flat.
The six fastest qualifiers, Ken Walton, Kevin Gundaker of St. Louis, Dick Schiltz of Waterloo, Iowa, Leon Plank of Eau Claire, Wis., Ron Jackson of Burlington, Iowa, and Mike Niffenegger of Kalona, Iowa, competed in a six-lap handicap race with Niffenegger posting a flag-to-flag victory.
Ron Fisher of Centuria, Ill., and Dalton Walker of Curryville, Mo., won their respective consolation races on Saturday night, enabling them to enter the field for the twin 50-lap features.
In the first feature race, Ken Walton jumped to an early lead when the green flag dropped with Kevin Gundaker right behind. Gundaker would take the lead on lap 4 and maintained it for the next 15 circuits until bowing again to Walton. Gundaker, charging hard, got together with Darrell Dake of Cedar Rapids, Iowa, between turns three and four and had to be towed to the pit area with front end damage.
Walton continued to lead the field for the next 25 laps but the victory wasn’t to be his. A broken spring would slow Walton with only five laps to go allowing Mike Niffenegger to inherit the top spot and go home with the $1,000 paycheck and trophy. Walton would settle for second with Billy Moyer Jr. of Des Moines in third, Ron Jackson in fourth and Ken Schrader of Fenton, Mo., in fifth.
The second feature saw the top six finishers of the first 50-lapper inverted in the front of the field with the other late model competitors filling in according to their finish in the first feature.
Ken Schrader took the lead at the green with Ron Jackson a close second. Jackson would charge ahead on lap 4 only to lose the top spot to Bill Martin of Council Bluffs, Iowa, for one lap. Jackson would get by Martin on lap 6 and hold it for the final 44 tours to take home the other $1,000 check and trophy.
For the second time that evening, Ken Walton found himself finishing second with Niffenegger, Schrader, and Larry Phillips of Springfield, Mo., rounding out the top five.