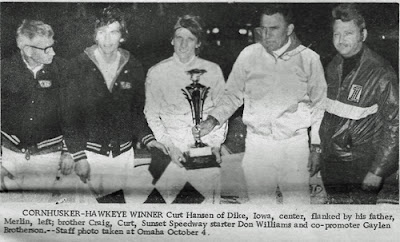 Omaha, Neb. (October 4, 1975) – Curt Hansen of Dike, Iowa, won the fourth annual Cornhusker-Hawkeye Challenge on Saturday night at Sunset Speedway.
Hansen, who was point champion for the second consecutive year at Oskaloosa, Iowa, picked up his fourth recent big win of the season. His earlier big wins were at Cedar Rapids, Iowa, Cresco, Iowa and Marshalltown, Iowa.
Hansen, driving the familiar blue #9 Camaro, joins fellow Iowans Verlin Eaker and Darrell Dake, both of Cedar Rapids as Cornhusker-Hawkeye Challenge champions as well as last year’s winner Bill Martin of Council Bluffs.
The race was marred by a chain-reaction crash earl in the evening when Omahan Tom Yocum lost control after he was hit and slid into the crowded infield.
Yocum’s car hit another, which pinned Jefferson, Iowa, driver Rich Lyon and Robert McPherson, also of Jefferson, between two cars. Lyons, point champion at Alta, Iowa, was rushed to an Omaha hospital but died two hours later from massive internal injuries.
It was the first death ever recorded at Sunset Speedway in its 19 years of existence. 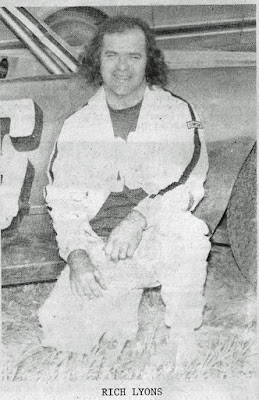 McPherson remained hospitalized in fair condition with lacerations to the head and a fractured left leg. He was expected to be hospitalized for several months.
Kent Tucker of Aurora, Neb., who won his heat race by a substantial margin and was the Nebraska driver favored in the race, took the lead in the 100-lap main event, but on lap 3 his left front wheel broke forcing him to the sidelines. Tucker was point champion at Lincoln, Neb. and Hastings, Neb., and winner of Nebraska’s Triple Crown race held a couple of weeks earlier at Sunset.
The race would hold the fans in suspense as Hansen and Ed Sanger of Waterloo, Iowa, would deliver a see-saw battle for the top spot throughout the race. Hansen would lead a total of 55 laps while Sanger held the top spot for 43 go-rounds. Finally, Hansen would secure the point for good on lap 79 and never look back.
The only red flag occurred on lap 72 when Em Fretheim of Decorah, Iowa, climbed the north wall in turn four.
Bill Martin, the defending race winner, had engine trouble on lap 28 and dropped from the race.
Only 13 of 22 starters finished the feature. Of the 22 starters, only six were Nebraskans. The invading Iowans outshined their neighbors and things are expected to be as tough when the Iowa chauffeurs return to Sunset for the Spring Invitational in April.