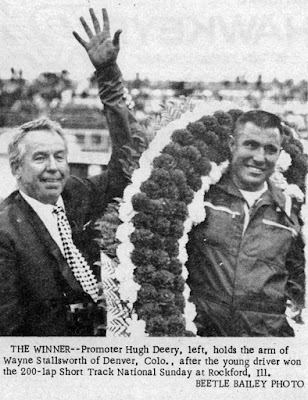 Rockford, Ill. (October 4, 1970) – A crowd of 3,852 watched Wayne Stallsworth of Denver Colo., win the fifth annual National Short Track Championship 200-lapper on Sunday afternoon at Rockford Speedway.
Stallsworth inherited the lead from Bud Helm of Brainerd, Minn., on lap 141 when Helm’s car developed an ignition problem. Helm had been the dominant car up to that point, with a 2-lap lead over his nearest competitor.
Stallsworth would lead the remaining 59 circuits and win by a couple of car lengths over Don James of Bloomington, Minn. Ramo Stott of Keokuk, Iowa, the defending race winner, would claim the final podium spot with a third-place finish.
The outcome of the race may have been very different if many things hadn’t happened…
Joe Shear, the Rockford point’s champion from Beloit, Wis., pushed Helm for the first 110 laps of the event before he dropped from the race with a broken fuel pump.
Both Stott and Dick Stang of Prior Lake, Minn., spun out early in the race only to recover and finish third and fifth respectively. Bob Jusola, the Elko, Minn., champion, blew a motor as he began moving his way to the front to challenge the leaders. Marlin Walbeck, the 1967 champion, crashed when he spun out in the oil that spewed from Jusola’s car.
Jon Chrest of Minneapolis set the event’s fast time at 14.58 seconds but the youthful driver had trouble in the feature when his drive shaft gave out on lap 20.
Results –