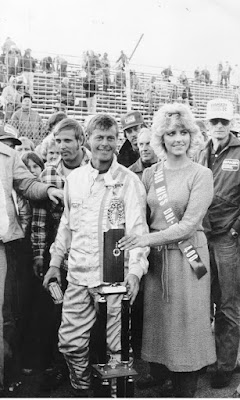 Winchester, Ind. (October 5, 1980) – Terry Senneker of Wayland, Mich., claimed his first-ever American Speed Association victory, winning the Dri-Powr 400 at the historic high-banked Winchester Speedway.
It was perhaps the wildest of the eleven previous Dri-Power 400 events staged at the half-mile asphalt speedway.
Although Senneker finished seven laps ahead of runner-up Ray Young of Dolton, Ill., Senneker was in third place with just eight laps left remaining – behind race leader Mike Eddy and second place Mark Martin. However, as the pair entered the first turn on lap 393, Martin was on the inside, but drifted up into the side of Eddy, sending both into the wall between turns one and two, sidelining both cars.
That allowed Senneker to coast home to an easy win with Young completing 393 circuits for second. Eddy was third and Martin fourth with 392 laps completed.
Wrecks also eliminated the likes of Bob Senneker, the brother of the winner, Doug Klein, Jerry Sisco, Dave Brandenburg, Jeff Pflum, Ken Harrison, Dave Jensen, Chuck Roumell, Bob Strait, Ron Hayes, Randy Sweet and Harold Scott.
In all, there were 15 caution flags for 122 of the 400 laps run.
Martin set a new record in qualifying with a lap of 15.741 seconds for an average speed of 114.351 mile per hour.