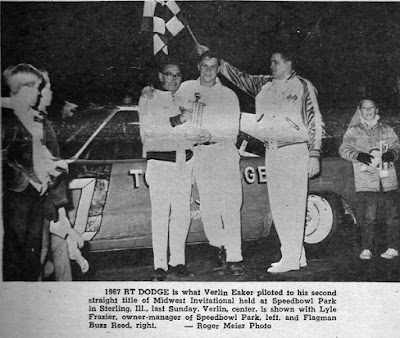 Sterling, Ill. (October 6, 1968) – Verlin Eaker of Cedar Rapids, Iowa, set fast time in qualifying at the sixth annual Sterling Midwest Invitational, then went on to win the 100-lap feature running the last 25 laps on a flat tire.
The safety inner boot, used on many race cars today, prevented Eaker’s tire from going completely flat and permitted him to pull away in the closing laps of the marathon race.
Eaker led all but one of the 100 laps when Don Bohlander of Glasford, Ill., briefly led one circuit. He collected $1,000 for his victory.
USAC star Herb Shannon of Peoria, Ill., finished second while Bohlander took third. Jim Gerber of Long Grove, Iowa, finished fourth, the last competitor to complete the entire 100-lap distance. Only 18 of the original 30 starters finished the event that was run without a single caution flag being thrown.
Young Lem Blankenship of Keokuk, Iowa, came from his 28th starting position to grab fifth place in an outstanding display of driving on the dry, slick clay oval. Bill McDonough of Cedar Rapids, Iowa, was equally impressive as he moved from his 26th starting spot to finish sixth.
A total of 66 cars were entered for the Speedbowl Park season finale with 16 drivers timing in under the 19-second mark on the third-mile oval.
Don Davidson of Des Moines won the 30-lap semi-main while B.J. Higley of Sterling, Ill., won the 20-lap consolation.