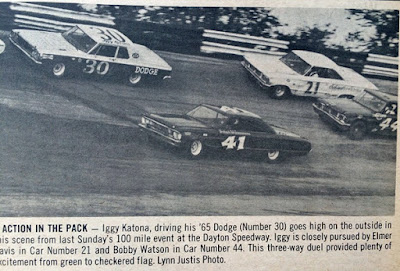 Dayton, Ohio (October 2, 1966) – Iggy Katona, looking as trim and dapper as the Dayton Speedway landscape, leisurely whipped a field of 16 late models stock cars in the 100-lap ARCA-sanctioned feature that marked the debut of a new regimen at the west side track.

Driving a 1965 Dodge, Katona crossed the finish line just three seconds ahead of a 1964 Ford wheeled by Elmer Davis with a crowd of 3,000 watching.

But Iggy had the race won before it even started. That was when Les Snow, the co-favorite in the race, heard strange noise coming from under the hood of his ’65 Dodge.

First place money ($400) wouldn’t have bought Les a new engine, so the chubby mechanic chose not to take chance on irritating the power plant with a berserk connecting rod.

Snow had been the day’s fast qualifier with a lap of 20.09 seconds. This 96 mile per hour trip around the high banks wasn’t far off the track record, proving that the recent asphalt patching job had done some good.

It also established Snow as the favorite, a role he would soon yield to Katona when the engine went sour.

Katona, who packs 200 pounds on his 5’ 9” frame, was chased frantically by 1964 Ford’s driven by Davis and another leadfoot from the Ohio country, Bobby Watson. Those three ran away from the other 14 cars in the field.

On lap 47, Watson left his right door on the guardrail in turn four, giving race fans a great view of the inside of his car. But Bobby kept going despite the invasion of privacy.

Iggy pressed a little harder on the accelerator and managed to get through unscathed. Davis stayed close but Watson, probably tiring from fighting the wind buffeting through his car, fell back. On the last few orbits, Iggy pressed it a little harder and Davis’ Ford couldn’t keep up.

There were just nine cars running at the end, wrecks and popping tires having taken their toll.

“I cold have run all day,” Katona admitted afterwards. “If Les Snow had been out there, you would have seen a different race.” Snow and Katona have won 14 out of the last 15 ARCA races.

“The track didn’t seem rough to me,” Iggy stated, adding that he had more stamina after losing 25 pounds by, “not eating so much.”