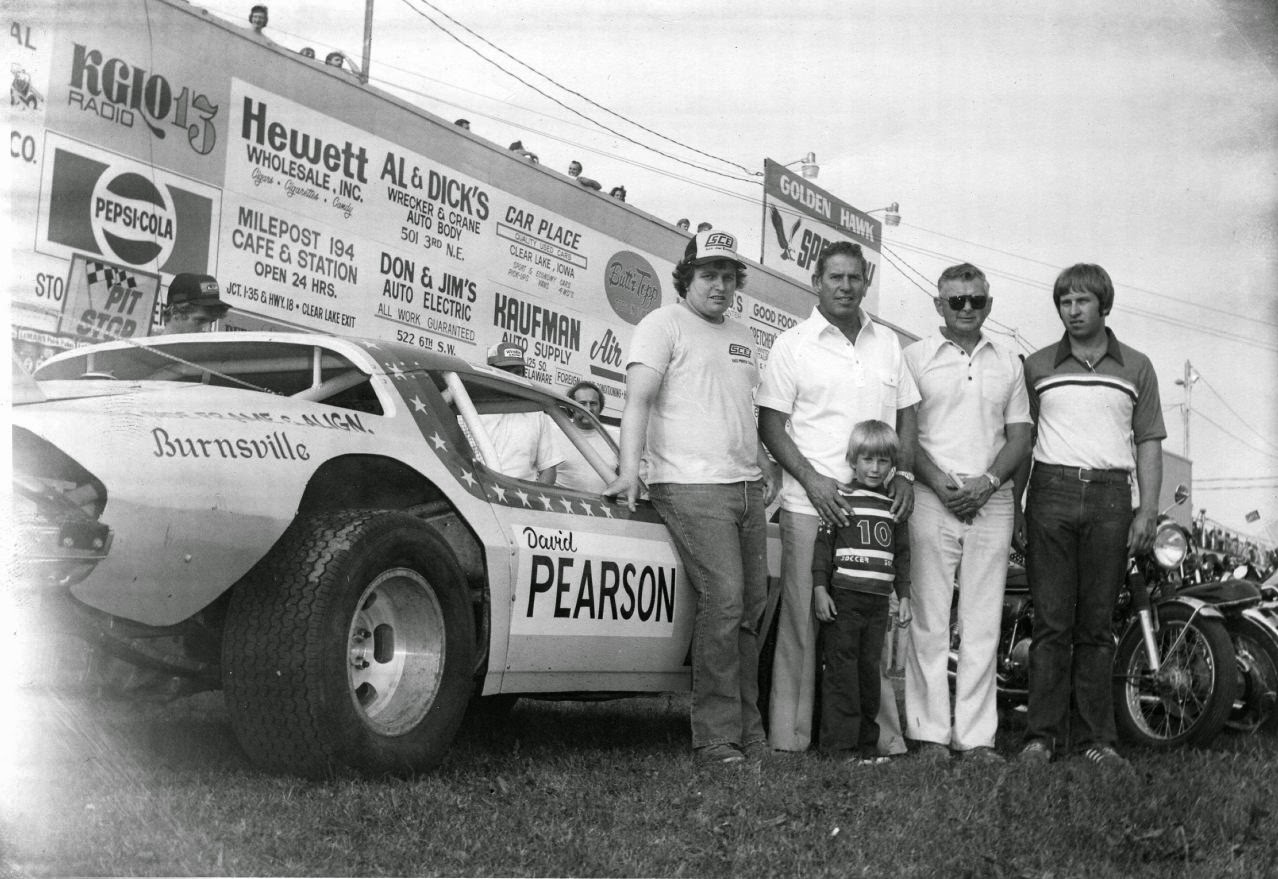 David Pearson (second from left) poses with Golden Hawk Speedway promoter Floyd Lenoch (second from right) and some fans prior to racing action on “David Pearson Night” in Mason City, Iowa, on July 8, 1979.
(July 8, 1979) — He was known as the “Silver Fox.” We can all remember watching the 1976 “Daytona 500” when he crashed with Richard Petty on the last lap and then limped across the finish line to score a dramatic victory.


David Pearson of , was one of the winningest drivers on NASCAR superspeedways yet for one evening he chose to race on a half-mile dirt track on the North Iowa Fairgrounds in .


Pearson had lost his long-time ride with the Wood Brothers/Purolator Mercury earlier in the season following an incident at Darlington Raceway that was viewed by millions on national television. Pearson left the pit area early only to have his two left side tires fall off before he even reached the track. There had been a huge mix-up in the pits that caused Pearson to leave before the lug nuts were put on the tires.


Some blamed the crew. Some blamed Pearson, Whatever it was; it broke up the Pearson-Wood team that had dominated NASCAR for many years.


With no ride, Pearson chose to make special appearances around the nation racing on dirt tracks and it was during that period he found himself at Floyd Lenoch’s Golden Hawk Speedway in on .


A capacity crowd turned out to see this veteran and he didn’t disappoint. He started dead last in his heat race and ran right near the tail the whole distance. “I wasn’t too concerned about racin’ in the heat — I jus’ wanted ta get the feel o’ the car,” he said in his lazy southern drawl. It was Pearson’s first time in the car owned by Bruce Busho of


Come feature time, it was obvious to everyone that Pearson had found the feel. From the back of the pack, he flew through the field like he had been in the same car and had driven the track a 100 times. He soon moved to the front of the race and eventually finished fourth behind winner Mike Niffenegger of Kalona, Iowa, Bill Rice of Des Moines and Kenny Farrell of New Hampton, Iowa. That he didn’t win didn’t seem to bother the race fans, they left that night knowing that Pearson could indeed drive a racecar.