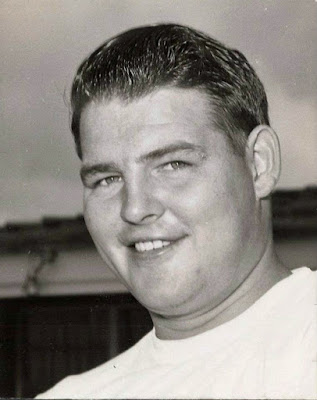 
Grand Forks, N.D. (July 31, 1955) – Dewayne "Tiny" Lund, a stock car driver who won his share of races several years ago before going into the Air Force, is now starting to climb the ladder of success in late model stock car racing.

Piloting a 1955 Chevrolet, which had been driven with widely varying success earlier this season by Marvin Copple of Lincoln, Neb., Lund of Harlan, Iowa, won the 200-lap IMCA stock car finale at the fairgrounds track in Grand Forks, N.D., on Sunday afternoon.

The win was Lund's first under the IMCA banner. A crowd of 3,500 watched the Auto Racing, Inc., promotion.

Lund trailed Herschel Buchanan of Shreveport, La., throughout the first 99 laps, but took over the lead with his 1955 Chevrolet on the 100th lap and continued on to victory.

The huge Hawkeye drove most of the way without a hood on his car. He literally "blew his bonnet" on the 30th lap of the only 100 miler to be staged in North Dakota this season.

Apparently this had little effect, however, because Lund wound up more than a lap ahead of the pack at the checkered flag.

Lund finished second in an IMCA stock car feature race in Minot, N.D., on Thursday, July 28th. Friday, July 29th, at the same track, Lund was fourth fastest in time trials but could only manage a 12th place finish.