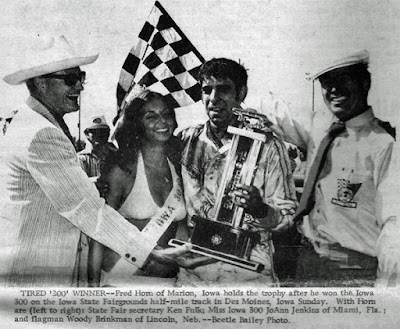 Des Moines, Iowa (July 9, 1972) - The "Old Fox" wasn't on hand for Iowa's longest stock car race on Sunday, but his tactics still proved to be the winning way.

For six years in a row, Ernie Derr, Keokuk, had dominated the 300, run on the State Fairgrounds one-half mile track under the sponsorship of the International Motor Contest Association (IMCA).


That left the field in Sunday's race open to a new winner, and Fred Horn, , came through in steady fashion to win the 150-mile event.


“I pulled an Ernie Derr on them,” Horn quipped after the race, adding, “I just took it easy and kept a steady pace, while other drivers pushed their equipment beyond its limit.”


That style of driving, while it is far from spectacular, has been the trademark of Derr and earned him the “Fox” nickname.


Although Horn said his engine was operating with a cracked piston, the 1970 kept going while the others fell by the wayside.


With 40 laps to go, Horn was running more than a lap behind leader Gerry Harrison, He passed the driver on the 261st lap to cut the lead to less than one lap and began to cut away at the driver’s margin.


In the next 17 laps he had slashed almost half a lap off 's lead, and then got the break he needed. 's car blew a tire and he had to come into the pits on the 288th lap.


Horn was short of tread on his tires when he finished the race, but he made it all the way through without a tire change - a major accomplishment on the concrete-like dirt surface.


got back out in time to take second, with Gordon Blankenship, finishing third. Blankenship was forced into the pits twice on unscheduled stops when he had tires go flat, and finished five laps behind the leaders. Horn and were the only drivers to complete the full 300 laps.


Carl VanderWal, Ames who ranked 10th in IMCA stock car points going into the race, completed 251 laps of the race by the time the checkered flag came out for a 16th-place finish.


The IMCA point leader, Irv Janey, , was touted as the favorite in the race, but as has happened several times before, mechanical failure put him out of the running. He went out of the race with a transmission failure before the halfway point of the endurance run.