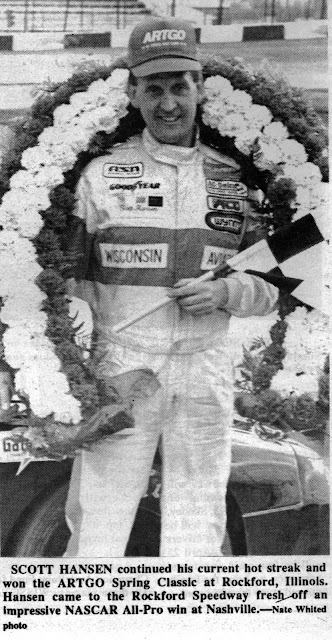 (April 4, 1993) – Scott Hansen of , charged into the lead on the 44th lap and never looked back at the Rockford Speedway to win the 16th annual ARTGO "Spring Classic 150" on Sunday afternoon.


Hansen, who was sidelined most of last year with a broken leg, had been hot in recent weeks scoring a major NASCAR victory in , two weeks before recording his first ARTGO win in over two years.


Tracy Schuler survived an early race incident to finish second in front of Steve Carlson, Rick Beebe, and Jim Weber/ In earlier qualification runs Weber, who was the defending winner of the race, blazed an all-time record late model lap of 12.850 seconds (81.712 mph).


“I’d like to dedicate this win to my friend Alan (Kulwicki),” a somber Hansen said following the race. He then climbed back into his car and took a Polish victory lap.


ansen drove a black Ford Thunderbird in Sunday’s race for new car owner Rick Sclazo of It was Scalzo’s first win on the ARTGO tour.


A near record field of 48 ARTGO Challenge Series late models participated in the opening day card, which was run in frigid conditions just 72 hours after a major spring snowstorm.


Hansen was pelted with snowballs in victory lane after the win. He had won the race in 1990. Matt Kenseth, who had led from the drop of the green until Hansen took over, drilled the infield wall on the 112th lap and was eliminated from the event.


Kenseth had his sights set on his second career ARTGO win after being one of the quickest cars in practice both Friday and Saturday. He dropped from first to eighth on the lap Hansen grabbed the lead.